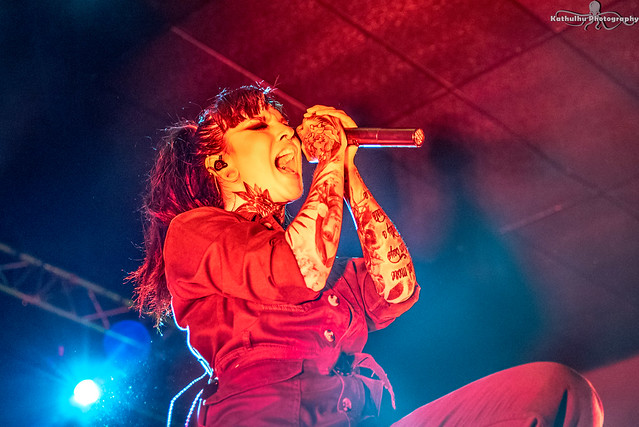 Ukrainian progressive groove metal band Jinjer are due to release a new album titled Macro on October 25th and are currently on tour to promote it. We caught them at their sold-out show at Club Red in Mesa Arizona, on September 13th, with both The Browning and Sumo Cyco. Unfortunately Symo Cyco had to bow out of their performance due to a medical emergency, so hopefully, they’ll be back on the road soon.

The Browning is an electronicore band from Kansas City. I had never even heard of them before and I didn’t even know that electronicore was a thing. Maybe I live under a rock. Although their style is not in my preferred subgenres, they did put on a solid performance and were fun to watch.

Jinjer is an excellent live band. Vocalist Tatiana Shmaylyuk smoothly transitions from death growls to soulful singing in a way few can emulate. The band fuses many different styles and sometimes it feels like you’re watching a jazz ensemble that suddenly goes rogue. They are definitely a great band to see live and they still have plenty of dates left in the tour although many are already sold out.

“Judgement (& Punishment)” is the first single and music video released off of the band’s new Napalm Records-released album Macro: