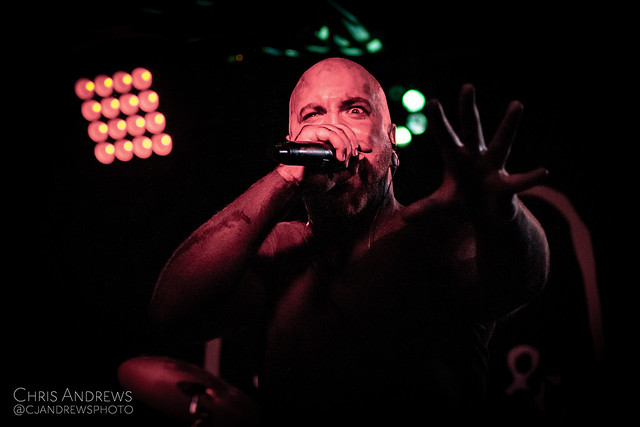 A UK public holiday on Monday means that this Sunday show in the compact upstairs room of a Brighton pub is well attended; the draw of no work in the morning and hometown metal heroes Jonestown headlining brings a healthy contingent to Brighton’s Hope and Ruin. Support came from In Fear They Follow, Deference, and fellow Sussex band Ariandelle.

Ariandelle opened up tonight’s bill; with a more melodic edge to their music than the rest of the lineup, it’s an apt starter for the evening. The instrumental side of their sound is huge for a three-piece, but with some booming of the bass-end in the venue, they could be found sounding tighter than they did this evening; on record, there’s certainly enough promise for them to be worth seeing again. With frequent shows between Brighton, Worthing and further afield they’re certainly a band to be kept an eye on.

Deference’s video for “Burial” gets pretty dark; check it out:


Deference’s sound mixes driving, rhythmic guitars with electronic effects over the top to construct their djent-influenced style. It’s a refreshing take an on a genre that’s been somewhat quieter recently, with Deference coming off as a cross between a young, hungry Periphery (with more balls to the cleans) and metalcore stalwarts As I Lay Dying. Mental positivity is a key theme in their lyrics and spoken sections, and it resonates with tonight’s audience who move along to the groove. It’s a tight and impactful performance which comes as a pleasant surprise at this stage of the bill, and the constant motion of vocalist Rob Lea drives it forward well.

In Fear They Follow bring tight rhythm guitar work with pronounced mutes and metallic bass driving the cadence of their music. With drummer Sam Kellaway seemingly locked on rails, such is the accuracy and rhythm of the group’s momentum. There’s more than a hint of Bury Tomorrow to the Bristol band’s sound, which is no bad thing at all and very much welcomed in the UK scene. Clearly, there’s something in the water in the south of England (props to any Bury Tomorrow fans who got that reference). Movement is not optional to In Fear They Follow’s music; all present are helpless to headbang along to the capable up-and-comers’ catchy brand of death metal. With just the one EP under their belt, Solace released this year, the band’s whole path is in front of them and promises to be long and fruitful on the back of tonight’s consummate performance.

Witness In Fear They Follow’s visually stunning video for “Erebus:”


Jonestown sits atop tonight’s lineup as comparable veterans, with two albums to their name and an extensive touring history across the length and breadth of the UK as well as several festivals. Right off the bat, if the rhythms of In Fear They Follow were constant, with Jonestown they are unrelenting and have the room nodding along from front to back. We’re now streets away from the melodic, almost progressive metal of Ariandelle who started the evening and into punishingly heavy territory.

Harley Anderson dishes out his guttural vocals in perfect time with the groove, prowling the stage like the deranged ringmaster of the circus of brutality his bandmates put on behind him. By the time their set hits “Akohigaro,” the audience is swirling in front of the compact stage, stirred by the performance on display. With Craig Radford’s crisp and accurate performance on guitar meeting bassist Lloyd Dunkley’s surprisingly technical lines, as a whole Jonestown are an unstoppable force of nondescript metal. Blending groove metal, entirely right-hand driven almost djent rhythms and straight-up hardcore sections, they transcend genres as an indescribable entity of heaviness, akin to the extreme end of Dillinger Escape Plan along with their underlying threat of insanity.

Jonestown’s “Burn Victim” manages to be both unreasonably heavy and impossibly catchy:


Leaving the room overheating and aurally satisfied with ears ringing, those in the main room of the pub downstairs could be forgiven for thinking the apocalypse was happening right above their heads. All of the bands tonight showcased various areas of the metal spectrum and did so superbly and memorably; no mean feat in a no-frills venue where only the music and the bands themselves take centre stage. With the evening’s conclusion, I have four artists on my list to try and see again as soon as possible.