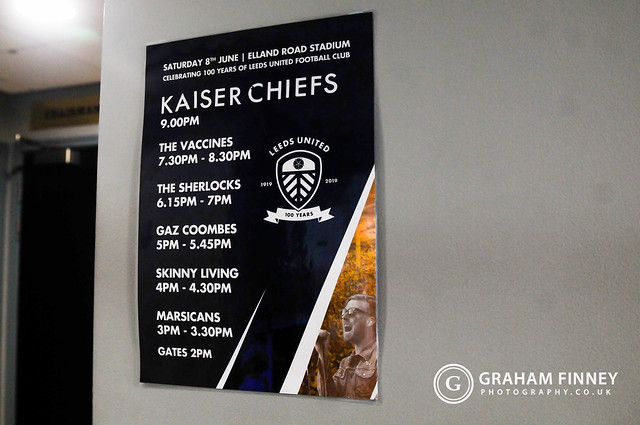 Every band knows that hometown gigs are always a bit more special than your average tour stop-off but, for Leeds indie rockers the Kaiser Chiefs, this gig at Elland Road, the home of Leeds United Football Club, was just that little bit more special. Not only was it the band's biggest hometown show of their career but it also held the extra importance of being the centenary celebration for the football club ensuring the ground was filled with fans, family and friends and an impressive supporting bill that includes Marsicans, Skinny Living and Gaz Coombes.

The crowd was in fine voice when The Sherlocks took to the stage and with the rain holding off for a bit, the Barnsley band treated the crowd to a ten song set while fellow indie favourites The Vaccineshad the crowd up on each others shoulders and bouncing along as they made a welcome return to Leeds but, really, tonight the supporting cast was just there to provide entertainment until the main event.

Introduced by Leeds football legend Chris Kamara, the Kaiser Chiefs put on the kind of show this spectacle demanded. Frontman Ricky Wilson tore about the stage from one side to another as the band plundered their back catalogue for a twenty song set. Chucking out hit after hit, a blast of blue and yellow confetti filled the air as "Na Na Na Na Naa" kicked in while "Parachute" saw Wilson take a walk through the crowd before perching on top of the soundtower for "Modern Way" and "Target Market".

Further into the set, if talk of a new Kaiser Chiefs album didn't get this partying Leeds crowd excited then a triple treat of "Everyday I Love You Less and Less", "Ruby" and "I Predict A Riot" brought near mayhem to the masses of fans packed onto the field. The night ended with an encore of "Coming Home", "Pinball Wizard" and "Oh My God" as the Kaiser Chiefs made sure that this truly special evening ended in the kind of spectactular and unforgettable style it deserved.

Here's some fan-filmed footage of the Kaiser Chiefs performing "I Predict A Riot" at Elland Road: