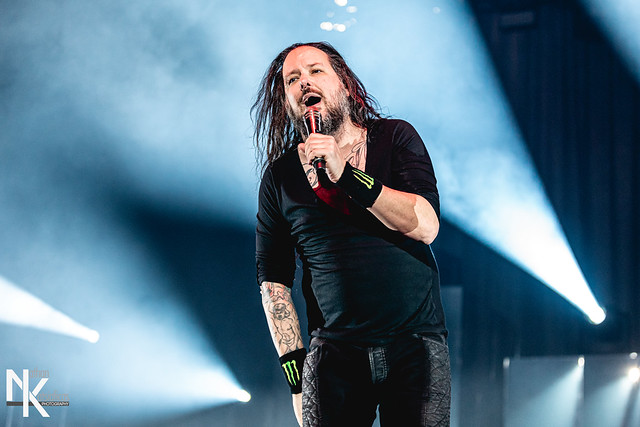 Nu-metal heavyweights Korn and rockers Breaking Benjamin are almost halfway through their month-and-a-half long run across North America. We caught up with them as they played before a packed SNHU Arena on a cold, rainy night on January 25th in Manchester, New Hampshire. The night would be one of nostalgia, sing-alongs and sore necks.

As Breaking Benjamin was taking to the stage, the venue had filled almost filled to capacity. They wasted little time bringing out some fan-favourite tracks, a smart move given the older demographic in attendance, with “Diary of Jane,“ and “Until the End,“ within the first few songs. My middle school-era self was thrilled, this is easily the best I¤ve seen Breaking Benjamin since their original lineup (prior to their hiatus and reforming). It was even cooler to see them dust off golden oldies like “Blow Me Away“ and “Polyamorous,“ though mega-hit “So Cold,“ was definitely the loudest sing-along of the night.


The audience was more than primed to rock by the time Korn came on to “Here To Stay," off of their 2002 release Untouchables. What ensued was an impeccably tight, high-energy performance that would be hard for most acts of their calibre to come close to. Frontman Jonathan Davis was a force to behold, bounding around the stage and hulked over his erotic, biomechanical microphone stand, as he delivered every guttural and melodic note. In front of him, the first mosh pits of the night opened up as the band continued with “Blind.“ Davis¤ cohorts were just as entertaining to behold, especially guitarist Brian “Head“ Welch, who was a flurry of dreadlocks as he unleashed each riff, pausing occasionally on his perch atop a stage monitor to cast a steely, menacing glare over the crowd.

There was not a single dull moment as they made their way through what would be a 14-song set, including a medley of Metallica’s “One“ interspersed with “Shoots and Ladders,“ and an epic encore that ended with the neck-breaker of a track that is “Falling Away from Me.“ This is definitely not a tour to be missed. Fortunately, you can catch Korn on the road with Breaking Benjamin through March. Check below for the remaining dates!

Watch the official live music for “Cold,“ off of Korn’s latest album The Nothing: