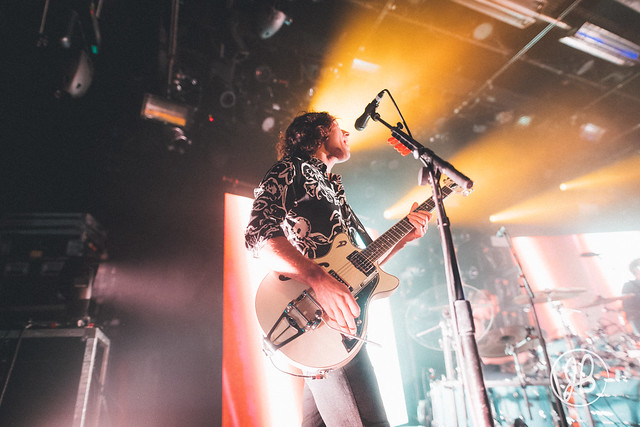 To start this off, when we say Marianas Trench is incredible live, we really mean incredible. If you are looking for a band to give you a whole experience from start to finish, look no further. Upon arrival to Toad’s Place in New Haven, Connecticut, fans that were lined up outside the door piled in, many rushing to the barricade to mark their territory at the front of the stage. Walking around the venue, fans of every age sported the band’s merch from throughout the years, jumping with excitement and bonding with one another over their favorite concert memories. Quite frankly, these were the most (and most positive) fan-to-fan interactions we’ve seen at a show in so long, only proving how significant of an impact this group has had on their followers.

Marianas Trench entered the stage to quite a grandiose welcoming. Every fan screamed while each member took the stage smiling ear-to-ear. The band cracked the whip with Phantoms (2019) opening tracks “Eleonora,” “Only the Lonely Survive,” and “Echoes of You” in their album-respective order just to get the crowd warmed up. We can argue that the album is still new enough where fans don’t have all the lyrics down-pat to sing along yet, but that certainly didn’t stop them from dancing and swaying to every beat. Like we said earlier, Marianas Trench gives you the whole experience, and their production was nothing short of that. Mystical fog machines and a bright, vibrant light show only enhanced their musical extravagance.

Throughout the entire night, Josh Ramsay’s face consistently glowed in the light of the fans. His frequent crowd interaction highlighted just how appreciative he really was to be where he was, regardless of how many times he verbalized this to the crowd as well. Being the vocalist-songwriter-producer triple threat that he is, Ramsay surely showed off his expertise in every song. Whether he was playing maestro conducting the fans’ choir voices during “Celebrity Status” or belting out an impeccable vocal riff (like he memorably did in “Glimmer”), Ramsay is undeniably one of the best performers in our time. Though Marianas Trench’s “Suspending Gravity” tour has come to a close, we’ll keep jamming Phantoms on our own and with friends in hopes to see more of them in the near future.

Off of Phantoms, watch the recently-released music video for “Glimmer”: