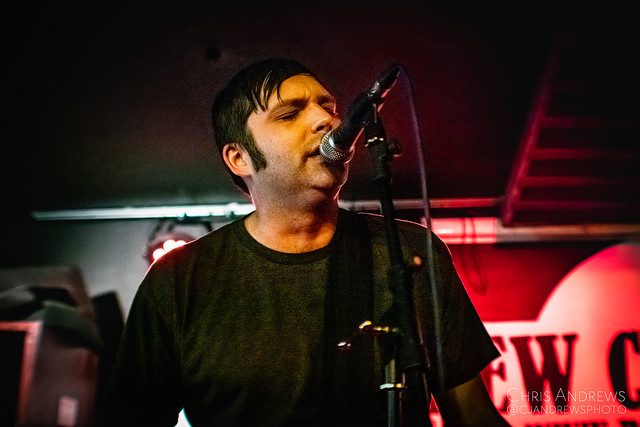 London’s New Cross Inn transforms into a worth gig venue on evenings such as this, with a sizeable main room and fairly generous stage, with daylight still streaming through tall windows upon arrival at 7:30 pm.

With the event having kicked off earlier at 5:00 pm, the first band are Triple Sundae, with a sound akin to The Matches with their sweet and upbeat pop-punk. With harmonies added by drummer Zandro, vocally their performance is consummate however they are let down by not tuning guitars between tracks and, at times, this slides so far as to become a distraction. Nonetheless, an energetic way to get into the evening.

Aerial Salad, up next, bring more attitude and a larger sound in their three-piece lineup, with a more aggressive approach to punk. At times the band channels pure British oi, whilst blending this with more accessible American style punk rock. Through their set vocalist Jamie Munro asks the audience to be gentle with their moshing, but the movement within the crowd has only just begun for the evening.


Next on stage are Nosebleed from Leeds, who bring a cross of punk and psychobilly, with emphasis on the psycho. Guitarist Eliott Verity and bassist Ben Hannah are impeccably dressed for approximately two songs in two-tone jackets and ties, then strip down to shirts for something more appropriate for heat. From here, both of them spend the majority of their set on the floor in the crowd complete with their mics and mic stands, with the moshpit moving around and amongst them. It’s an unforgettable way to play, and one which gets the crowd pumped up for what’s to come.

The penultimate band for this evening is The Murderburgers, who is less frenetic in their more pop-punk approach. Sounding at times like a Scottish fronted Sugarcult, they can count plenty of friends and new fans in the audience tonight and go down well, with those in attendance gladly using the space made on the floor from the band not being there to throw themselves around from beginning to end of their set.

The Murderburgers video for “Shot In My Skull” will give you a taste of their upbeat pop-punk:


Approximately 20 seconds into Off With Their Heads’ set opener “Disappear” (off latest release Be Good), I’m thrown forwards onto the stage with the band, as the crowd behind me unleashes all of the energy built up over the evening. With both my camera and shirt taking on a considerable amount of beer retreating back into the room is the safest option.

From further back, it’s easy to see why those in attendance tonight are reacting as they are. Off With Their Heads perform their music flawlessly live, with added energy and passion coming through in both the music and Ryan Young’s vocals. By the time that fan favourite “Nightlife” is played there are constantly crowd surfers moving atop the rest of the audience (in a 350 capacity venue), drinks flying and hands raised in appreciation for what’s on display. With the evening having sold out and potential attendees still seeking tickets up until the night of the event it’s a venue smaller than that which Off With Their Heads could have played, but all the more special for it.

Raucous shows like tonight’s are a reminder why punk made me fall in love with real music from my first show seeing Dead Kennedys about fifteen years ago. Off With Their Heads are a band coming off the back of one of their strongest albums playing a venue they’re bigger than, and it’s a perfect combination for an unforgettable show. They’re definitely an artist you should have on your radar to see as soon as you can. Make sure to check out our review of Be Good, and additionally, ensure you order or download the album now.

Off With Their Heads’ video for “No Love” covers all the bases by making every idea they thought of:


Off With Their Heads' Be Good was released on August 16th via Epitaph Records: