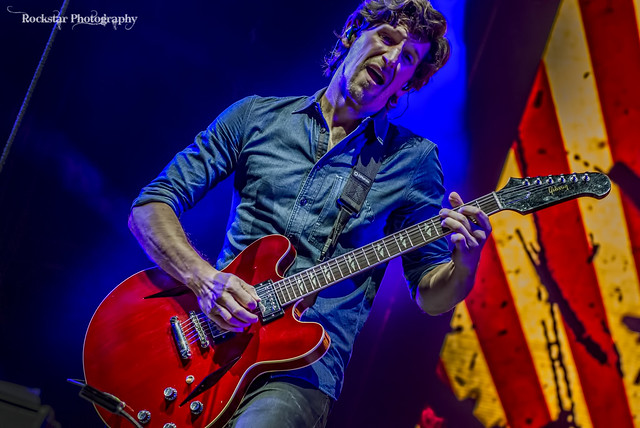 Toronto was the final stop of a summer tour with which fans of Canadian alternative rock music have become very familiar. Now 21 years since its inception, Our Lady Peace’s Summersault Tour rolled through Budweiser Stage last week, a fitting location to complete a tour for the hometown heroes. Along for the ride this summer were Bush, Live, and Dear Rouge, perfect company to wind down another summer concert season at the formerly named Molson Amphitheatre. There was no shortage of eager and music-hungry fans here this evening.

The musical fun began with Vancouver’s Dear Rouge, the alternative-dance rock band whose members also happen to be married to each other. Storming onto the stage in a blinding neon yellow jumpsuit accompanied by bright yellow beams from spotlights, singer Danielle McTaggart wasted no time in getting the crowd to respond to their really upbeat party style music. Husband and guitarist Drew kept things on the “rock” side with some great “picking!” The first three songs the band performed were “Modern Shakedown,” “Live Through The Night,” and “Boys & Blondes.”

The night’s second act was Live. The Pennsylvania rockers kept the crowd dancing throughout their set. With only time for ten songs and nine studio albums of material to choose from, I’m pretty sure that the band members had a hard time choosing material. Celebrating the 25th anniversary of the hugely successful release Throwing Copper, it made the hairs on my arm stand on end when halfway through the set, the acoustic guitar from (my favourite Live tune) sounded out over the amplifiers and the opening notes of the megahit “Lightning Crashes” started.

Included as a bonus version of the recently-released Throwing Copper 25th-anniversary deluxe edition, check out the lyric video for “Susquehanna.”


Taking a moment to look around, the venue was alight with cell phone torches. (I still miss the bic lighter days though). The band even gave the classic Stones song “Paint It Black,” a try which was a welcome addition to a hit-filled set. Live sounded as good as ever to the delight of everyone in attendance! It also seemed as though the audience’s shouts of joy and approval fuelled the band’s enthusiasm. At one point, all four guitarists came and lined up at the front of the stage to the delight of fans, as well as us photographers, who were given an amazing photo op! The first three songs Live performed were “Rattlesnake,” “Selling The Drama,” and “Shittowne.”

After a short intermission, English rockers Bush (who are also in their 26th year as a band) had their turn to shake Bud Stage’s foundations! Not wasting any time it was just hit after hit, and the crowd loved it. With the huge hit “Machinehead” as their very first song of their also short but sweet ten-song set, there was no chance for fans to catch their breath. Singer/guitarist Gavin Rossdale (who still seems to be a female fan favourite), drummer Robin Goodridge, guitarist Chris Traynor, and bassist Corey Britz looked to all be in tip-top condition as they were all over the stage, seemed to really be enjoying themselves, and sounded better than I expected! The first songs that Bush played were “Machinehead,” “This Is War” and “Everything Zen.”

It was now time for our local rockstars to hit the stage. Our Lady Peace also on their 26th year together, walked out to shrieks of approval from what sounded to be a female fan dominant crowd, or perhaps the men in the audience gave their best effort at really high pitched screams too. Singer Raine Maida seemed visually moved by the huge fan welcome. He actually took a moment to look out over the crowd, smile, and say wow! It must have been quite a sight to see from his vantage point.

Maida, along with Duncan Coutts on bass, Steve Mazur on guitar, and drummer Jason Pierce wasted no time in keeping the nights party in full swing. Performing hit after hit, no one’s asses even had a chance to meet the seats they were supposed to be sitting in. Fans were on their feet and dancing in the aisles from the start of the first song.

Just one of their many massive hits, check out the classic video for “Clumsy”:


One of the great opportunities OLP gives to us photographers is the ability to photograph the entire show, offering us many more visual perspectives than only the first few songs from the stage. It’s especially gratifying since they are such a visually appealing band, and they have quite a spectacular light show. It was a great night of alt-rock and seemed almost like travelling back in time to a much more innocent era of the ‘90s, when so many of us who were in attendance grew up in. After all, being somehow transported to that moment in time where every song has a special meaning or memory to you is what going to a concert is all about isn’t it?

Our Lady Peace’s most recent and ninth album Somethingness was released on February 23rd, 2018, via Warner Music Records: