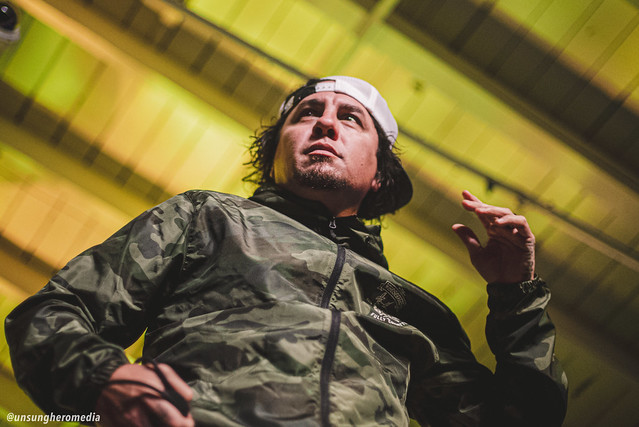 Veteran heavy rockers P.O.D. are still blasting their anthemic tunes from city to city. Supporting their 2018 release, Circles, they played to an intimate Lexington, Kentucky crowd with a stacked line up of familiar faces and newcomers. On this special evening, Nine Shrines, Islander, Hyro The Hero, and Nonpoint supported the headliners from the Southtown.

Islander have been known for their wild antics on stage. Even the sun still being up didn’t deter them from their rhythmic chaos. Hyro The Hero may be a new face to some but his live show will definitely leave a lasting memory. He is the first artist I’ve seen to jump into the crowd and start the mosh pit. Nonpoint, who have had quite the career themselves since forming in 1997, woke the crowd up.

P.O.D. have mastered that unmistakable blend of hip-hop and hard rock and it is on full display on the new album with tracks such as “Soundboy Killa,” “Rockin’ with Best,” and the title track “Circles.” Lead singer Sonny Sandoval lyrical flows are as strong as ever and accompanied with the boisterous beats from Wuv Bernardo behind the drum kit and bass lines from Traa Daniels. One of the band’s new songs, “Always Southern California,” reminisces to the band’s hometown and makes you want to move there for the consistent summer days in comparison to the ever-changing weather of the Midwest.

The first single and music video from P.O.D.’s latest record Circles is “Listening For The Silence.”


Along with playing new material, P.O.D. still gave the crowd of faithfuls a smattering of the classics. From “Will You,” to “Boom,” and even “Southtown,” most of the hits were pulled out on this evening. In fact, the band hit all the cornerstone tracks of their career.

The set hit a sombre note when guitarist Marcos Curiel played the unforgettable opening to “Youth of a Nation.” As the stage was bathed in red light, you couldn’t help but think of why this song exists. Released on their triple-platinum fourth album, Satellite in 2001, “Youth of The Nation” was a song that was written in response to many school shootings happening around the United States. And to hear it being played 17 years later with all the gun violence and school shootings that still plague America made for a powerful moment with the crowd singing along.

Aside from playing their hits, P.O.D. still brings the passion on stage, which intensifies the music. No matter the size of the crowd or venue, P.O.D. proves that you’re Rockin’ with the Best.

A reminder back to the music video of arguably P.O.D.’s biggest hit, “Youth of The Nation.”