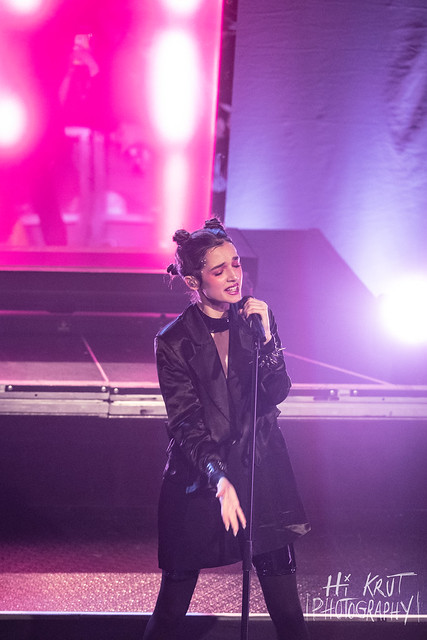 The venue affectionately known as the TLA on South Street in Philadelphia brings in lots of well-known and obscure music to the area. So it’s not shocking that Poppy not only played here, but also performed in front of a sold-out crowd. The audience made for such a tight squeeze it did not allow a way for me to make it to the front of the stage for photos, so I darted up a flight of stairs to a balcony where I could oversee the entirety of this excited, eager crowd and truly get a feel for just how packed the house was.

It was then that a light flashed and drew my eye to the figure dancing center of the stage, the entity that is known as Poppy, dressed in what I would describe as high-fashion goth attire. She mostly danced, twirled, and sang center stage in front of a light panel that often would switch between lights and a reflective surface. Every so often she would antagonize the audience, drawing in them in, by asking in her well-known character voice, if we knew what a mosh pit was or to let us know who she was with her iconic phrase, “I’m Poppy.” Which of course incited reactions of yelling, screaming, shoving, and fists in the air.


But who is this Poppy that we speak of? Internet sensation? Musician? Actress? Brand spokesperson? Writer? Yes, all the above. She is the face of Sanrio’s, “Hello Sanrio” collection. She can be seen in a series of videos directed by the infamous Titanic Sinclair, where most people first believed she was in a cult.

Above all, however, Poppy is a musician and she’s touring like mad supporting her newest album and third full-length, I Disagree, on various dates through the U.S. and Europe now through September 2020. Moreover, Poppy was just confirmed as support on Deftones’ just-announced massive summer North American headlining tour with Gojira.

You’re encouraged to fall down the rabbit hole that is Poppy who also has her own show on YouTube Premium and just released her first graphic novel titled, Genesis One, which has been described as “techno-horror fantasy” and has an accompanying album called, I C U: Music To Read To.