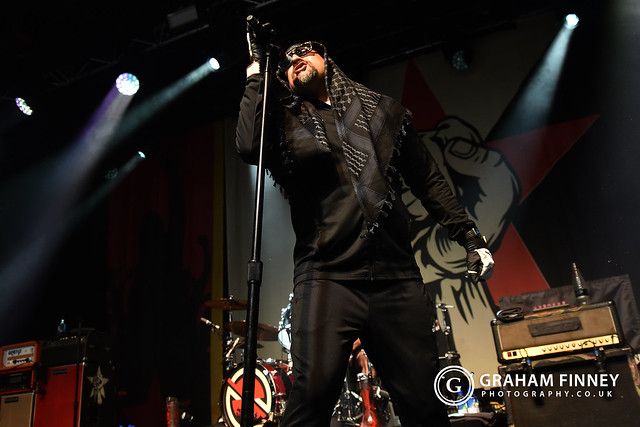 “It’s absolutely packed in there, mate, I’ve never seen it this busy.” exclaims one of the venue security staff as we shoehorn our way through to the front ready for Prophets of Rage to take to the stage. Playing only two headline shows in the UK, the other 24 hours earlier in London, it’s no surprise that tickets are hot property for the rock/hip-hop supergroup and, as they take to the stage for their opening track, “Prophets Of Rage”, it almost feels like a valve has been released as an entire room goes, not to put too fine a point on it, fucking berzerk.

With Tom Morello’s signature guitar sound filling the air, the group spit out the likes of “Guerilla Radio,” “Bombtrack” and “Testify” from the Rage Against The Machine repertoire, while the mid-section of the show sees the B-Real, Chuck D and co. treat Manchester Academy to a hip-hop masterclass with the likes of “Bring The Noise,” “Jump Around” and “Insane In The Brain” turning the Academy floor into one bouncing mess of grinning faces.

Here’s some fan-filmed footage of the band performing “Cochise” in tribute to the iconic Chris Cornell:


A scathing “Sleep Now In The Fire” hits the spot before things head down a truly emotional route as the band pay tribute to the much-missed Chris Cornell playing an instrumental version of “Cochise” with the sole sight on stage being that of a mic stand lit up by a spotlight. Listening to this sold-out venue sing back every word of the Audioslave favourite was one of those moments that you’ll never forget with every spine-tingling lyric hitting you right in the feels.

With a guitar emblazoned with the words “Fuck Boris,” Morello joined by his RATM bandmates Wilk and Commerford incite absolute mayhem on the dancefloor as they race through “Bullet In The Head” and “Bulls On Parade” before an absolutely seething rendition of “Killing In The Name” incites an almost riot-like reaction from the crowd before the six-piece supergroup bring an end to the mayhem with a brutal version of “Bombtrack.”