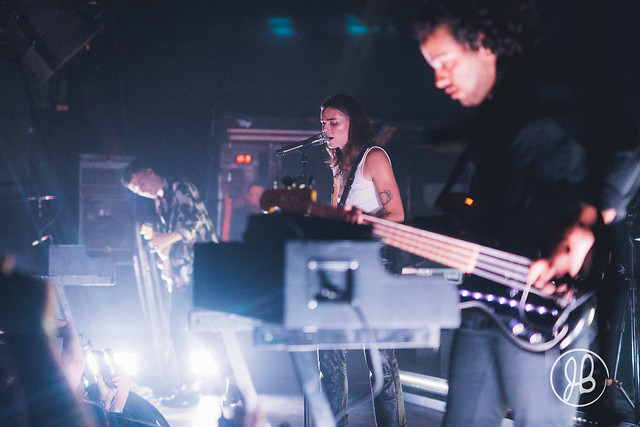 It’s been a minute, as the kids say, since we’ve seen PVRIS in action. The alternative three-piece took a much-needed hiatus from the music world after their non-stop global touring in support of their latest full-length All We Know of Heaven, All We Need of Hell (2017). They broke the radio silence back in July with mysterious social media posts and soundless video clips signaling a new era of the band, and the release of their first new single, “Death of Me,” practically sent fans into hysteria. Their single “Hallucinations” followed suit with the announcement of their signing to Warner Records and a mini-tour of intimate headline shows. With the promise of a new album on the horizon, we were beyond excited to see PVRIS going back to their small-venue roots for an intimate show at the Music Hall of Williamsburg in Brooklyn, New York.

Opening up for PVRIS on this short run was LA-based pop artist Upsahl. The second she walked onto the stage, she took total ownership of the night. Her performance was fun, lively, and undeniably mesmerizing. Is it weird to say her voice sounded like butter? She gave us just a taste of what her L.A. experience has been like, singing songs about rich friends, heart break, struggle, and drugs in the most creative and tasteful way.


After Upsahl had warmed up the crowd, everyone was more than ready for PVRIS. Fans nearby were murmuring things such as “I wonder how the new songs will sound live,” and, “I hope they play their old stuff.” Within moments of the house lights going dark, four silhouettes graced the stage and the haunting intro to White Noise favourite “Mirrors” swept over the speakers.

It is clear that PVRIS really put thought into the songs they chose to play given the diversity of the setlist. They brought back some serious deep cuts from their debut full-length White Noise such as the aforementioned “Mirrors” and “Eyelids,” as well as hits off of the follow-up album such as “Anyone Else,” “Half” and “Winter.” Prior to the start of “Heaven,” frontwoman Lynn Gunn had to take a moment to commend the crowd on their powerful energy, claiming that they hadn’t seen a crowd go as hard as the fans there tonight, and we were totally in agreement. Between the mosh pits during “Smoke” and “My House,” crowdsurfers galore, and everyone screaming (and we mean really screaming) at the top of their lungs to every word, these Brooklyn fans gave PVRIS the warmest welcome back.


Truthfully, what we were really interested in was how the new songs were going to translate live as PVRIS continues to hone in on their pop-side. As if there was any doubt, their performances of “Death of Me” and “Hallucinations” were borderline flawless, and the enthusiasm they had playing these two songs seemed to transcend their performances of any other song throughout the night. Their stage presence even seemed more lively than previous tours, and the overall chemistry between the members displayed their inseparable bond. Despite Gunn proclaiming her voice was getting exhausted towards the end of their set, she still managed to give the crowd 150 percent. Gunn radiated with confidence and gratitude whether she was bonding with fans in the front row or running around singing up on the venue’s balcony. To sum it all up, PVRIS has made it very obvious that they are moving in the direction they truly want to be in, and they are absolutely nailing it.

Though this intimate Brooklyn show concluded their mini-tour, we’re going to go ahead and assume that this fall headliner was simply foreshadowing what is yet to come. With the tease of two new singles but still little information regarding a new album, we are anxiously awaiting what PVRIS has in store for us in the near future.

All We Know of Heaven, All We Need of Hell is PVRIS’ sophomore effort, released August 25th, 2017, via Rise Records: