QUEENSRYCHE and JOHN 5 Deliver in a Big Way at the House of Blues in Anaheim, CA [Photos & Show Review] 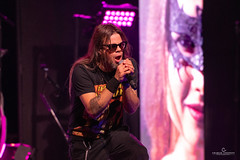 Queensryche’s “The Verdict 2020 U.S. Tour” began in mid-January, so having performed several dates already, the Seattle rock quintet was tuned up for its show in Anaheim last Thursday night at the House of Blues.

John 5, who came on prior to Queensryche, played a strong set of guitar-heavy instrumental rock. The longtime Rob Zombie guitarist, accompanied by a bassist and drummer, cranked out songs from his solo albums. Also in the set were snippets of some of rock’s greatest riffs and solos; notably Rush’s “Limelight” and “Fly By Night,” in remembrance of drummer/lyricist Neil Peart who recently passed away. Visually, a John 5 show is spectacular with its vibrant colours and circus props, as well as John 5’s sinister-looking clown getup. Gimmickry aside, John 5 is an obscenely-gifted guitarist, who got the crowd pumped.

There’s nothing you won’t enjoy about John 5 and The Creatures’ music video for “I Want It All:”


Queensryche, with vocalist Todd La Torre, at the helm, sounded tight, and drew the crowd’s attention by opening with “Prophecy.” The band followed with a string of their hits, as well as a couple of deep cuts that didn’t receive much airplay when they were released. “Screaming in Digital,” from the 1986 album Rage for Order, gave the hardcore fans something from the band’s more esoteric days.

Guitarist Michael Wilton and bassist Eddie Jackson were the only two original members on stage, but the classic sound was intact. Tracks from the recent release, The Verdict, particularly “Dark Reverie” and “Light-Years,” proved that the band isn’t skating solely on yesterday’s ice.

If you are a Queensryche fan who was around when the band was in their heyday, and you hadn’t given the band a fair hearing since ex-singer Geoff Tate left the band in 2012, La Torre would be under your scrutiny. As the frontman for eight years now, La Torre exudes confidence and certainly delivers as a singer. And yes, he hit the highest of the high notes in “Take Hold of the Flame” and “Queen of the Ryche.”

Taken from their most recent album The Verdict, check out the lyric video for Queensryche’s “Inner Unrest:”