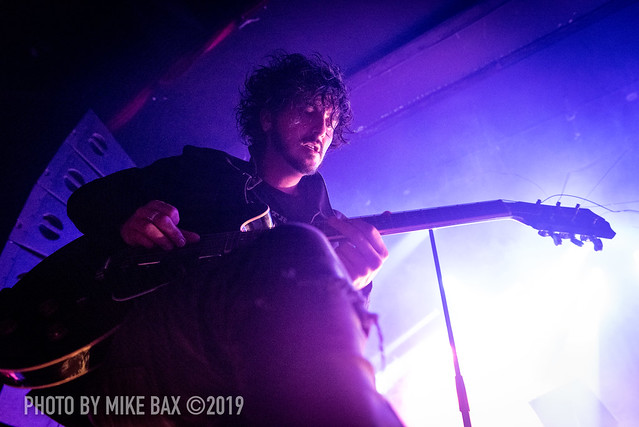 Most live shows consist of a band on stage attempting to connect with their audience, a number of fans in the room, some clapping hands and possibly a moment of connection between the crowd and the band. That latter point is up for debate, as I’ve attended numerous shows where it feels like there is an invisible wall between the group and the audience.

At a Reignwolf show, go in prepared for an experience! Singer, guitarist Jordan Cook (with whom we spoke in April) was in the middle of the audience a few times during this Mod Club performance. Bassist Stacey-James Kardash and drummer Joseph Braley also jumped into the middle of the crowd, dragging Braley’s drumkit onto the floor and bashing out a few songs while the crowd swarmed in around them. Early into the set, Cook walked through the crowd towards the bar and stood atop it while playing guitar, ducking down to keep from grinding his head into the awning that surrounds the bar.

There’s nothing out there like a Reignwolf show. The band worked their way through the majority of their debut album, along with assorted single released over the seven years leading up to the release of this year’s Hear Me Out. Obscured in smoke and rear lighting, the majority of this evening’s show was delivered as silhouettes of the three band members. The occasional cell phone flash and house lights would illuminate Jordan if he ventured into the crowd for a bit.

We’ll watch this music video from Reignwolf’s Hear Me Out album “Over & Over” again:


The performance culminated with the drum kit on the floor in front of the stage with Jordan standing atop of it, Braley seated in front of it and Kardash on the other side of the drums performing amidst the crowd for a few songs. Jordan managed to grab a sturdy attendee and jumped up on his shoulders to play a song as he was walked back to the stage for the band to wrap up their encore.

Reignwolf set the bar high this evening. This is now how I want every live concert I attend to be; up close and personal with ample audience participation. One of Reignwolf’s first singles asks, “Are You Satisfied?” Everyone at the Mod Club on this night can respond with a resounding “Hell yes!” An incredible live concert experience.

Windsor two-piece band The Blue Stones added to the evening’s experience, dropping forty minutes of dirty blues tracks in a similar fashion to Royal Blood. I’d never heard of them prior to seeing them tonight, and they totally impressed in their short opening set.

“Are You Satisfied?” If not, check out this live music video from Reignwolf’s performance at Music Midtown in Atlanta, Georgia:


Reingwolf’s most recent album Hear Me Out was released on March 1st, 2019. Check out the artwork: