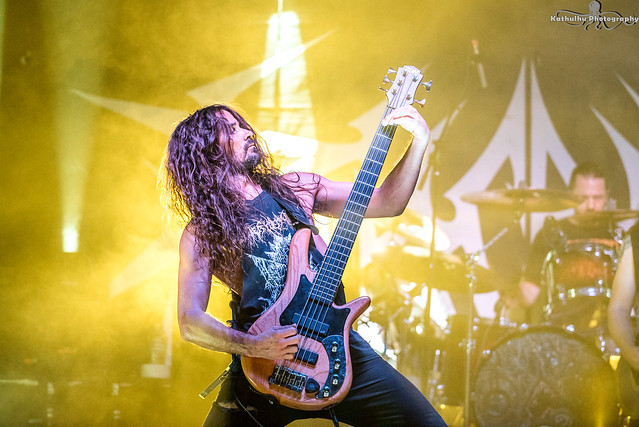 Revocation and Voivod are currently co-headlining a tour through North America and have assembled an impressive entourage to accompany them. We caught the show at Club Red recently in Mesa, Arizona that occurred on September 30th.

California death metal band Skeletal Remains have only been around since 2011, but in that span, they have perfected the old school death metal sound. Their live performance was solid. They tore through their set with bludgeoning consistency. Their latest album, Devouring Mortality, was released last year.

Off of the new album As The Kingdom Drowns, you must watch the music video for Psycroptic’s, “We Were The Keepers:”


Third on the bill was Tasmanian tech death tutelaries, Psycroptic. Filling in on vocals was Jason Keyser of Origin. His sense of humour provides a perfect foil to the very-serious-looking-while-they-play, David and Joe Haley. I had never seen Psycroptic before so I was really looking forward to their set. They started off with “We Were the Keepers” from their most recent album As the Kingdom Drowns and that set the mood for an amazing performance.

Quebec sci-fi metal progenitors, Voivod might seem out of place on this tour, but their progressive sound and energetic performance fit right in. It’s heartwarming to see a band that’s been around as long as they have to continue to tour and crank out albums. Their most recent album, The Wake, was released last year.

And to complete the evening was Massachusetts-based technical death metal overlords, Revocation. They played their 2018 H.P. Lovecraft inspired album, The Outer Ones in its entirety. As always, they put on a stellar performance. Guitarist/vocalist David Davidson is a virtuoso who obviously takes performing very seriously, but doesn’t take himself too seriously. Overall, every performance on the evening was a hell of a lot of fun. Each band, although quite different from one another, brought their own dynamics and brand of energy which made this a memorable evening, likely for most in attendance.


Revocation’s seventh studio album The Outer Ones was released on September 28th, 2018, via Metal Blade Records: