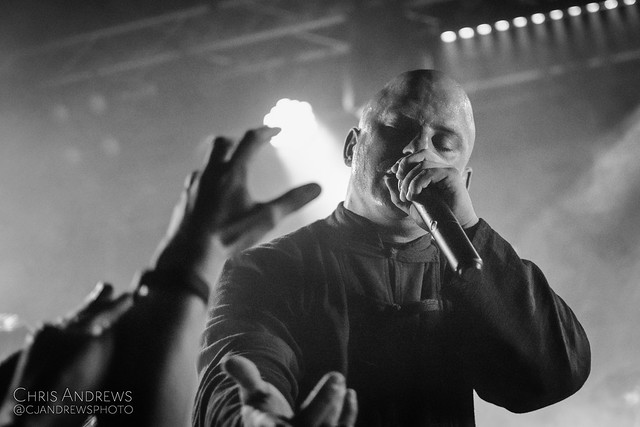 For the second time in less than a week, Camden, UK’s The Dome was home to a high-class lineup of heavy metal. Tonight’s bill was topped by progressively-influenced Rivers Of Nihil, townmates Black Crown Initiate, with blackgaze band MØL taking to the stage just after 7 pm. Orbit Culture opened up the evening, but unfortunately were missed with a 9-5 getting in the way of early attendance.

Post-black metal Danes MØL were the first group we actually saw play and their blend of reverb-heavy guitars and harshly screamed vocals from Kim Song Sternkopf filled every single atom of air in the room. They performed with such volume you could feel the bass drum to your core, and all near the front nodded along. Sternkopf parted the people on the floor to join them for a rousing “Bruma,” giving one fan an unforgettable memory by performing the chorus line of “still we think ourselves timeless,” face to face with them. By the time they closed their set out, there was a long and loud reaction from the crowd and the band’s set made for an excellent way to start the gig despite being a different genre to the others on the bill.

Behold MØL’s video for “Bruma” in all of its glory:


Main supporting act Black Crown Initiate is gearing up to release their follow up to 2016’s strong effort Selves We Cannot Forgive, and their debut on Century Media Records. It’s fitting then that the finest track in their set was “Years In Frigid Light,” the first song released from that as-yet-unnamed album. They put on an excellent set blending progressive and technical influences, laced with a healthy helping of groove allowing the audience to easily get into their music. Vocalist James Dorton got fully into British culture performing here by necking two cans of Stella Artois lager on stage, and combined with his menacing prowling and the non-stop movement and enthusiastic headbanging of bassist Nick Shaw the crowd were hanging on the group’s every note. Being joined on stage by no less than three members of Rivers of Nihil at various points as guests, usually to add vocals to those of spectacularly bearded guitarist Andy Thomas, their set went down extremely well and it won’t be long before they’re back on these shores to headline.

The main reason all were in attendance on this evening was to hear Rivers of Nihil’s 2018 masterpiece Where Owls Know My Name in its entirety; a modern progressive metal classic and one both critically acclaimed and hugely popular with fans. It was a sold-out crowd, one with feverish anticipation when bassist Adam Biggs announced to those waiting that tonight the band will be a fourpiece (plus guests), with one of their guitarists Jon Topore unfortunately in hospital (although reassured that he will be ok).

“Years In Frigid Light” is Black Crown Initiate at their best:


By the time they kicked into the second track off of Owls, “The Silent Life” blending straight into “A Home,” the crowd were ready to party and whip into a frenzy swirling in front of imposing vocalist Jake Dieffenbach’s gesticulations and instructions. The instrumental side of the band performed admirably even with a man down; some of the harmonies and subtleties which are one of the band’s strengths were lost, but it’s understandable and those in attendance looking to have a good time rather than soberly listen and criticize were not concerned at all. When their studio saxophonist and good friend Zach Strouse entered the stage at the appropriate moments the audience always seemed to find another notch to their excitement, and his solos led to even more ferocious moshing from those at the front, not something you would always associate as being driven by a brass instrument.

By the time the final sax notes rang out at the end of “Capricorn/Agoratopia,” there was a huge and highly deserved reception for the band who had just put on an exceptional show for the 500 or so present tonight. Entering into encore “Sand Baptism,” those who still had some left in the tank continued to go wild for the band, and the roars which greeted them as they left the stage to show how superb their performance really was. It’sIalways special when a band play their stand-out album in its entirety, and tonight was no different. If you have a chance to see Rivers Of Nihil rip through Where Owls Know My Name in full you’d be a fool to miss it.

Check out Rivers of Nihil’s riot starter “The Silent Life:”

Where Owls Know My Name was released on March 16th, 2018, via Metal Blade Records: