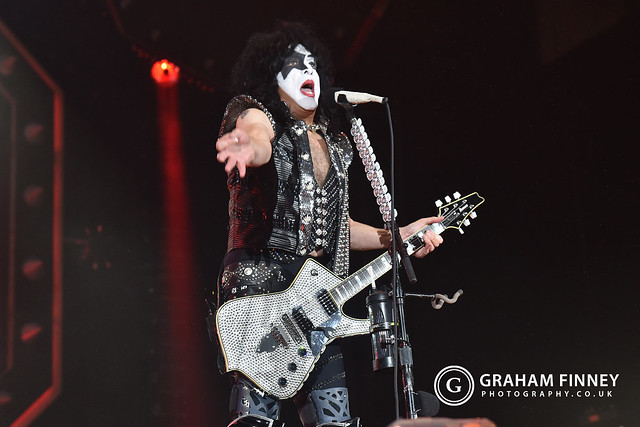 Fans of all ages are pouring into Newcastle's Utilita Arena as rock legends Kiss bring their End of the World final tour to the city. Young and old, face-painted like their heroes, you only have to look around the vicinity to see how important this band have been to their fans for the last four decades and these fans are fully expecting their rock heroes to go out with a bang.

As expected Messrs Stanley, Simmons, Thayer and Singer make sure they sign off in style. A black curtain adorned with their huge logo drops to reveal the band lowering down on platforms to the kind of pyrotechnics that would flatten a small town. “Detroit Rock City” kicks things off with “Shout It Out Loud” following it. “This is awesome… you people are awesome!” screams Paul Stanley midway through the set while more pyrotechnics rattle around the arena as the band plunder their unmatchable back catalogue treating fans to renditions of all the classics including “Cold Gin”, “God of Thunder” and more. Aside from the classic-laden set, no Kiss show would be complete without the theatrics and, boy, did the quartet pull out all the stops for this one. Fire, pyrotechnics, flaming guitars, this one had it all and that’s before we’ve even mentioned Gene Simmons performing 40ft up on top of a platform or Paul Stanley flying out over the crowd for “Love Gun” and “I Was Made For Loving You”. This was flawlessly choreographed lunacy at its finest!

Sounding as fresh as ever, this show had every Kiss cliché from Gene Simmons’ tongue-waggling to Paul Stanley’s mildly camp stage mannerisms – throw in an entertaining drum solo and there really isn’t much missing from the whole package. The night ended with “Beth”, “Crazy Crazy Nights” and a confetti-drenched “Rock n’ Roll All Nite” and, two hours later, it’s all over. It really is all over!

Their long time intro booms.. “You wanted the best! You got the best!” and, as the night comes to a close, it’s truly saddening to imagine a world without these four rock legends who, even four decades since forming, truly are the epitome of what rock n’ roll should be about.

Right to the very end Kiss are going to make sure you "Rock n' Roll All Nite":