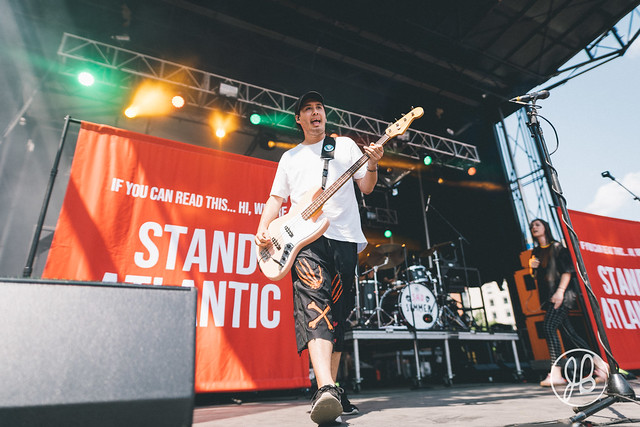 The death of the classic era of the Vans Warped Tour has allowed for the birth of something new, and yet just as magical. The Sad Summer Festival shook the music scene upon announcement, and we should just let you know right off the bat that it surpassed any of our expectations. With the first run of any festival, it’s typically safe to assume that it would have its complications. However, the Sad Summer Festival seemed to run as smoothly as possible (at least for attendees, that is) and gave us major Glamour Kills-era vibes. Since we attended the Worcester, Massachusetts date at The Palladium’s new outdoor venue, it was an all-around novel experience for both the festival itself and the attendees.

First of all, we have to commend the festival team on this incredible lineup and the general set-up of the day. A festival where almost every artist is of headliner status is hard to come by, especially considering how inexpensive the tickets were (for this Worcester date, tickets were anywhere between $27 to $40 USD before fees). From gathered information of previous dates, it seems the general set times rotate between the opening acts, and again between the headliners. In our experience, such a system is ideal for those who like to plan ahead accordingly, while still keeping the festival spontaneous enough to motivate people to arrive for doors.

Food trucks and beverage vendors were scattered throughout the festival grounds, including the Boston-based Bartleby’s vegan soul-food truck that had an extensive line the entire day. Merch tents and Instagram-worthy selfie stations lined the outskirts of the lot on the opposite end from the stage, leaving plenty of space for fans to dance, sing, and mosh to their content.

Listen, we’re Just Friends, ok? Watch the music video for “Supersonic” off Nothing But Love:


The day kicked off with ska-inspired supergroup Just Friends, who livened up the crowd that was already sweltering in the New England heatwave. Australian pop-punk upcomers Stand Atlantic truly brought their A-game and powered through their technical difficulties, while Mom Jeans followed up and toned the energy back down a bit. By this point, the number of attendees had grown ten-fold in preparation for The Wonder Years and Worcester natives Four Year Strong for the most intense sets of the day. Crowdsurfers flung themselves over the barricade without respite, and both bands fed ravenously off the energy, giving their best performances we have seen to date.

Once Four Year Strong had finished, the schedule officially began transitioning into the headliners’ portion of the day. The Maine took the stage, sporting their new pastel pink aesthetic, and played a diverse setlist of fan favorites and songs off the latest album released earlier this year. Mayday Parade serenaded us with a beautifully nostalgic set, and quite possibly played to the biggest crowd of the entire day. Upstate NY pop rockstars State Champs were the ones that closed out this semi-hometown date, ending the festival’s New England debut on the highest note possible.

The Sad Summer Festival’s extensive debut tour is still underway, making stops throughout the Tri-State and Midwest regions before returning home to Anaheim, California. You can check out the remaining tour dates (and their respective guest appearances) below to see if the festival is coming your way. Trust us, this tour is worth the road trip!

State Champs really were the state champs on this evening. Watch the recently released video for “Frozen” off Living Proof:

@ without The Maine
* without The Wonder Years
$ Every Avenue
% Set It Off
# Forever The Sickest Kids
+ Emo Nite (headliner-hosted after-festival parties)
Share this: