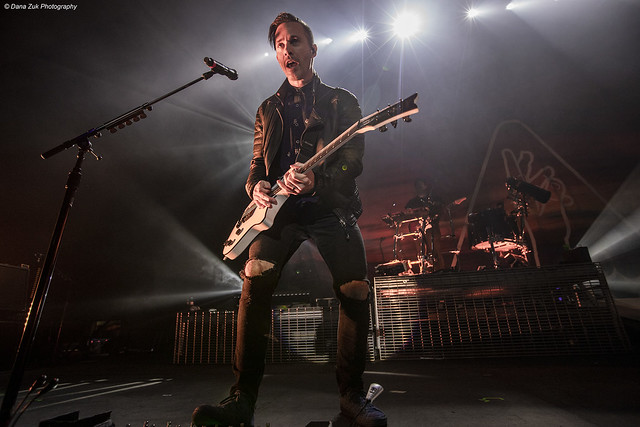 Papa Roach awed their fans on this evening. Between their stellar audience involvement with the tried-and-true call-and-answer section of their songs such as “Want To Be Loved” and “Scars” to frontman Jacoby Shaddix jumping down for an intimate moment with those crammed on the front rail, Papa Roach had the attention of their entire audience from the moment the lights turned off until the last few notes of hit song “Last Resort” rang through the monitors.

Just released at the end of September, here is the official music video for the title track to Attention, Attention:


Shinedown took to the stage and grabbed onto their audiences’ “attention attention” with a vice-like grip. Decked out in suits and looking like rock n roll 007 spies, Shinedown came to throw down and they did exactly that. Breaking into their set with the first tune on their new record “Devil,” frontman Brent Smith could be seen strutting back and forth on stage like a soldier in the military, before stomping along to the beat while Zach Myers would lay down tasty licks to complement select guitar sections while fireballs boomed from the floor of the stage.

Taking a moment to thank those gathered in the room and to truly make everyone feel comfortable in the house, Smith welcomed everyone to shake the hand of their neighbour in the audience, then began shaking hands with security personnel and photographers, putting an ironically, sentimental spin on the beginning of “Enemies.”

After laying down a hefty 18-song set, many concert-goers could be heard praising the performance they had just witnessed throughout the halls of the Edmonton Convention Centre, leading all to believe that the show was just what Edmontonian’s needed to really kick off the weekend of Thanksgiving festivities.