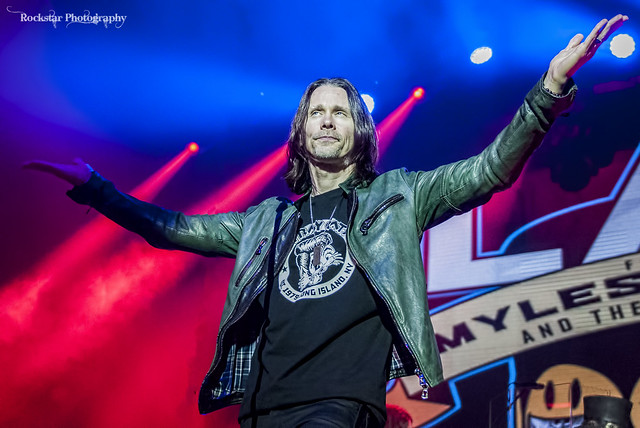 Last Monday Slash featuring Myles Kennedy & The Conspirators made a stop at Toronto’s Rebel Nightclub as part of their “Living The Dream Tour.” The tour is in support of Slash’s 2018 record, Living The Dream, his fourth solo album and third to feature Myles Kennedy & The Conspirators. Having just played this year’s edition of Heavy Montreal, this must have felt like an intimate musical experience in comparison.

Arriving before the doors opened, I sat in my car a while admiring the spectacular view of Toronto’s skyline and people watching. By this time, the line of eager concert-goers was sprawled out down most of Polson Street! With a capacity of some 2,500 patrons, it seemed as though the majority of them had arrived early to try for the best spot to see Slash, or to be the first to the merch stand, or bar to purchase a drink... since it is July and it’s thirsty business waiting in line to get into a show. Nevertheless, I sat in utter awe and amazement, as I watched the capacity crowd move smoothly, quickly, and without incident through the venue’s pretty tight security.

The first band to hit the stage and stir things up with their gritty hard-rocking style were L.A.’s fairly new talent, Dirty Honey. These guys were a lot of fun to watch, and the crowd seemed to feed off their enthusiasm. It seems as though this evening has just officially turned into a party! With only one self-titled EP under their belts, this is another one of those really cool, newer, up-and-coming bands that are paying their musical dues and working their way up the musical ladder of rock stardom. Considering that they’ve already opened for The Who back in May, and now are on tour with Slash, it seems as though they’re doing pretty good! A few of the first songs from the really well-performed set included “Scars,” “Break You,” and “Heartbreaker.”

See a sample of what you missed (or witnessed) on this evening with a live performance of “Anastasia” from the “Living The Dream Tour:”


A brief intermission allowed concert-goers enough time to refill at the bar and for the road crew to set the stage for the night’s main event, legendary rock ‘n roll icon, Slash featuring the powerful voice of Myles Kennedy, and bringing everything together with the highly talented Conspirators. You could feel everyone’s excitement and the atmosphere of electricity in the air as it finally neared showtime. As the venue lights dimmed and the pre-show music began, it started getting loud again. The band emerged first, all smiles as they walked onto the stage. The shrieking then commenced and judging from the extremely high pitch of some of the shrieks, I’m guessing there weren’t very many female fans in this audience.

Finally, Slash himself sauntered out from behind a backstage curtain, and Rebel erupted in jubilant cheers of approval. Wearing his iconic top hat and sunglasses with most of his face concealed behind long hair, not a lot of time was wasted on “hellos” or speaking to the audience. Instead, the band blasted straight into “The Call Of The Wild.”

Slash with Myles Kennedy and their backing band are another of those ensembles where each member seems so in tune with one another that the music just seems to flow out effortlessly. Kennedy has an incredible voice that sounds ideal when teamed up with the guitar wizardry of the unmistakeable sounds of Slash’s Gibson, and his fellow bandmates guitarist Frank Sidoris, bassist Todd Kerns and drummer Brent Fitz, both originally from Canada.

Turning my head around for a brief moment to take in the view of the crowd from the front of the stage, it was evident from the number of smiling headbanging faces, raised fists and devil horns that this crowd approved of what they were experiencing. I think I would have to agree with them.

Slash and Myles Kennedy & The Conspirators take you down the “Boulevard of Broken Hearts” with this recently-released new music video: