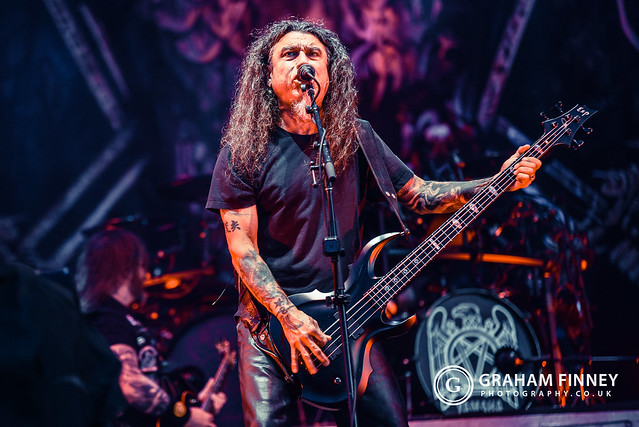 So Download Festival comes to and end for another year but not before bowing out it truly magnificent fashion. Not only have organizers pulled off the near impossible by getting art-rock recluses Tool to come out of hiding to close off this glorious weekend but there is the added bonus of getting to see thrash metal titans Slayer play their final ever UK show, alt-rock giants The Smashing Pumpkins and much more. With so much going on, here are some of our highlights of the final day at Download.

1.The Mud
- A controversial one here given how the weekend turned out and although Download had taken a pounding from the weather, the main arena had been kept relatively flood free throughout the weekend and, by Sunday, it was possible for festival goers to park their asses on the ground. A round of applauses must be given to the organisers for finding a way to ensure festivals goers were not met with rivers of mud and rain oozing past the stages. Of course, I am aware parts of the campsite were not as fortunate, however, unlike past years, when downpours have occurred, at least some parts of the festival were a little easier to navigate. It may be a little weird letting the mud into this list, but it’s strictly from a ‘it could have been so much worse’ stand point and the fact is, as the weekend went on, even with a couple more heavy showers, the arena was well maintained ensuring that this year could, and should not be declared another Drownload!

2.Kim Jennett shredding up the Dogtooth Stage
- Kim Jennett hails from Manchester starting out as lead singer of Manchester hard rockers Voodoo Blood and boy does she know how to rock. Wearing an incredible outfit, the Manchester rocker races onto the stage and, accompanied by her riff-slinging bandmates, knocks the crowd for six. While she might have only had an early afternoon slot in one of the smaller tents, there were plenty of fans packed in to rock out with her and, with a voice like Kim's, you can only hope that she caught the attention of somebody of importance here at Download that will give her the chance on a bigger stage to really kick the ass of this festival!

Here's Kim ripping it up with her recent single "Love Like Suicide":


3.NXT's return to Download Festival
- So, for all the wrestling fans out there, once again NXT returned to Download. Running since Friday, it was Sunday which demonstrated the final run for this year featuring the potential up and coming future stars of WWE. I’ll confess, I have never really shown any interest in wrestling but, after begrudgingly being dragged along by the significant other, it was an experience I would recommend. There was smack talk, plans made for a title fight in Edinburgh and, of course, matches. I’ll admit that I know none of these guys but it did rekindle my old love of WWF from when I was a kid. Fingers crossed NXT returns again next year.

4.Pure American metal perfection with Lamb of God
- Lamb of God arrived on stage to a huge reception with the main stage shaking from the cheers of fans and, even before the first song, “Omerta”, fully kicked in, circle pits began to erupt all over the place. Lamb of God is the sort of band that doesn’t require any special pyrotechnics or extravagant stage set up, they simply command respect from the audience and today was no different with Randy Blythe leading the thrash metal quartet with pure, unrivalled raw energy. No one could ask for more with Blythe even getting up close with the audience. They may never reach the heights of a headliner, but would anyone even want that? They’re placing on the line-up was sheer perfection!

5.Fever 333's explosive Avalanche Stage set
- When they performed on this very stage last year, Fever 333's set caused absolute pandemonium so it comes as no surprise that as soon as their return to Download was announced, you just knew this was going to be one of the most exciting and exhilerating thirty five minutes of the weekend. Possessing the fury of a young, modern Rage Against The Machine with the kind of hooks and melodies that turned Linkin Park into worldwide superstars, the songs are laced with a hard-hitting social and political message that goes off like a car bomb in the packed out tent.

Fever 333's set was one of the most explosive highlights of the weekend:


6.Slayer's final UK performance
- Slayer's appearance this year would mark the last time they would ever take to the stage again (at least in the UK) so this show was always going to leave a bitter sweet feeling with their legions of fans. Despite Slayer clashing with The Smashing Pumpkins and Tool, Slayer's army of fans descended upon the Zippo Encore stage to bid a fond farewell to one of the most influential thrash metal bands of a generation and, as has already been seen on their final run of dates, the band are going out all guns blazing firing through an immense back catalogue. To all those out there wallowing in the thought that Slayer has declared this is the end of the road, I will say this, how many times have you heard this sort of things from other bands? Yes, this could very well be the end of Slayer, but never say never!

7.Tool's long awaited return to the UK
- Download saved the best for last, a band that has (to the best of my knowledge) only graced the main stage at Download on one previous occasion. They killed it then and surprise, surprise, they killed it once more! Tool has never been a band to do anything half-arsed, if they don’t want to play, you could offer them the universe and they would still turn it down. The reason? Simply put, Maynard James Keenan is a perfectionist so, if he cannot give it his all, he wont give anything! To comment what was going off on stage would be redundant given I was too far back to see properly but the stage was awash with colour and the screens either side of the stage were a psychedelic trip of hallucinogenic visual effects that had you feeling like you were in another dimension! Each Tool song is an epic masterpiece in their own right and, given how tightly the entire band played, each song played was easy to get lost in, almost like falling down the rabbit hole, a deep and incredible journey.

8.The Last Big Party
- Although the curtain has fallen on the last band of the year, there’s still plenty of fun to be had and at least half the festival is pumped and unlikely to just go to bed to prepare for their journey home, that’s a problem for the following morning! No matter where it was - be it the village, the campsite or the VIP bar it is the last chance to cut loose before returning to normality. For my friends and I, we were back hitting to Bullet cocktails along with the beers at the guest bar and dancing the night away into the early hours of the morning to DJs covering tunes from every genre from the wide spectrum of rock, metal and punk.

What a weekend, what a festival, what an exceptional array of bands! Now we wait to see what next year’s Download has in store for us, see you then!