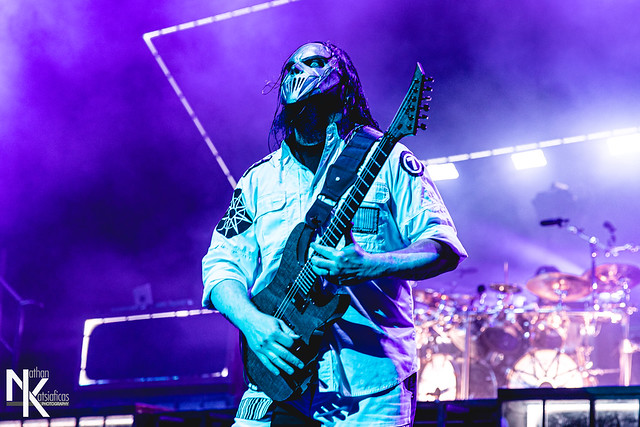 Iowa metal giants Slipknot have been tearing up stages across North America this summer on their inaugural Knotfest Roadshow, a much smaller yet equally awesome touring version of their famous Knotfest festival, in support of their latest record We Are Not Your Kind. Direct support on this tour is Volbeat, who, while a great live act in their own right, are really the odd men out on this one! French metallers Gojira and Polish blackened death metal act Behemoth round out the lineup. We caught the tour as it was in its final stretch, arriving at Mansfield, Massachusett’s Xfinity Center to play before a nearly sold-out audience on August 27th.

The evening began with a criminally short set delivered by Behemoth. It felt odd to see an artist of Behemoth’s caliber opening the night off, but then again, the beauty of the Knotfest Roadshow is that the entire lineup features a whole bill of heavy hitters. Enveloped by gratuitous amounts of stage fog, the band took to the stage in masks to perform “Wolves ov Siberia,” followed by the more classic track “Daimonos” and the anthemic “Ora Pro Nobis Lucifer,” which was punctuated throughout by bursts of flame. Seeing Behemoth with production on par with that of their European performances, was far beyond epic. While much of the audience was still getting to the show, of those that were in attendance, many were clearly seeing Behemoth for the first time, with reactions ranging from awe to confusion. Luckily, Behemoth seemed to have an easy time winning them over, eliciting many a nod or headbang by the end of the performance. Their set would go on to include the blisteringly fast “Conquer All,” and “Chant for Eschaton 2000.” All in all, it was one hell of a way to kick the night off.

You may want to prepare yourself for some intense noise with Behemoth’s music video for “Bartzabel” off of I Loved You At Your Darkest:


Gojira picked up right where Behemoth left off, with an impeccably tight set that began with mega-hit, “Toxic Garbage Island.” Their groove-oriented brand of heavy metal was just what was needed to keep the intensity going. Frontman Joe Duplantier was his usual expressive self, grimacing in a power stance while shredding and delivering his vocals. Despite having less production, it was impossible to look away from their display of sheer musicianship. Their set would go on to include more fan favourites like “The Heaviest Matter in the Universe,” and “Stranded.”

Setting things up for Slipknot was left in the capable hands of Volbeat. Soon into the set, they themselves even admitted that they were out of place on this tour, but nevertheless pressed on with a set that had a good many in the venue rocking along. After all, it is hard to resist the charm and showmanship of lead guitarist and ex-Anthrax member Rob Caggiano. The band were only into their second song “Lola Montez,” when a fight seemed to be breaking out in the pit, causing frontman Michael Poulsen to take a pause so that event staff could attend to the skirmish. They would continue with the classic track “Sad Man’s Tongue,” which provoked a sing-along. Volbeat is fun in the right setting, but it felt strange to go from guttural satanic death metal to technical death metal, to rockabilly-inspired rock, only to go heavy again with Slipknot soon arriving on stage. They’re genre-adjacent enough to overlap fanbases to some degree, but many seemed to sit out from their set, opting to fill up on beer or take a bathroom break.

“Solway Firth” is the latest single and music video from We Are Not Your Kind:


At last, it was time for Slipknot to unleash a furious seventeen-song set. The band pulled no punches from the start, beginning right off with “People = Shit.” This was followed by some fast numbers, including “(sic)” and “Get This.” There is so much to take in visually from their staging this tour, with an entire stage built from LED panels and treadmill-like floors atop the middle raised section, and both percussionists on some sort of mad science-looking pedestals.

Despite member changes here and there over the years, the band still shines as one extremely solid live act, both on material old and new. Their latest single “Solway Firth” sounded incredible live! The stacked set-list would go on to include such hits as “Wait and Bleed,” “The Heretic Anthem,” “Before I Forget,” “Psychosocial,” and more. My only gripe was that they saved the crushing tack “Surfacing” for their final encore when those of us sane folks were making our mad dash to get to our cars and avoid sitting in traffic for two hours just to get out. The tour is just about at its end but judging from this evening’s festivities, it’s been a memorable summer for one of metal’s premier acts.

Slipknot’s sixth studio album We Are Not Your Kind was released on August 9th, 2019, via Roadrunner Records: