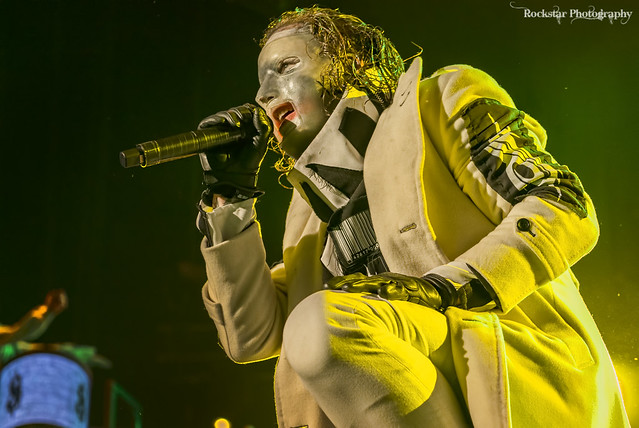 For anyone in the area of the venue not aware of what was going on, it must have been a terrifying spectacle. Slipknot fans descended upon the city in full regalia, including some pretty creepy looking masks. All part of the Knotfest experience. I’ve been noticing a trend that concerts are including more and more bands, which means doors and showtimes are much earlier these days. Today was no exception, with doors opening at 4 pm, and the first band going on at 5:30 pm already! Yes, sir, it’s going to be a long night of metal.

First up tonight was Poland’s Behemoth. Straight outta Gdansk, the band is credited with playing an integral part in establishing the extreme metal scene in Poland. The first thing one would think when seeing this band for the first time is “KISS meets Slayer,” and the fans loved every minute of it. Crowd surfers wasted no time and just went for it, there was a steady stream of bodies over the barricade from start to finish of this night. From the start of their set, Behemoth had flames and explosions on stage. At one point guitarist Nergal appears with what looks like a pair of branding irons spewing out fire. Really dramatic and really theatrical, but what else would you expect from a Behemoth concert? Their first three songs were; “Wolves Ov Siberia,” “Daimonos,” and “Ora Pro Nobis Lucifer.”

Get into the spooky madness that is Behemoth with the music video for “Sabbath Mater” from the album I Loved You At Your Darkest:


Second up was Gojira, from Bayonne, France. This band comes out completely differently than Behemoth, no fire, no explosions, a little bit of smoke, and just plain street clothes, but, man, did they ever let it rip! With six studio albums to their credit, this band certainly has more than enough material to keep these fans happy for much longer than the short set that they were given time for. Even if it was only for eight songs, for that short while, the pit at Bud Stage was utter mayhem, and we loved it! Gojira’s lineup has been the same since 2001, composed of brothers Joe Duplantier on guitar/vocals, Mario Duplantier on drums, Christian Andreu on guitar, and bassist Jean Michel Labadie. Gojira’s first three songs were; “Toxic Garbage Island,” “Backbone,” and “Stranded.”

Preparing everyone for the headliners to come is actually one of my favourites, Denmark’s Volbeat. The first time I saw this band, they opened for Motorhead in Hamilton and already then they kicked ass! Volbeat is one of those bands that sounds great live or recorded. I guess the best way to describe them is a heavy melodic band with influences from Johnny Cash and Social Distortion. On tour promoting their brand new album Rewind, Replay, Rebound, Volbeat now, believe it or not, have seven studio albums to their credit. Guitarist/vocalist Michael Poulsen had fans on their feet and rocking through their entire set, asking fans if they want heavy or rock... For the song “Black Rose,” Danko Jones, who is featured on Rewind, Replay, Rebound, made a special appearance to add his kick-ass touch to the song. They even made fans giggle when Volbeat did a metal version of Dusty Springfield’s “I Only Want To Be With You.” Volbeat’s first three songs were; “The Devil’s Bleeding Crown,” “Lola Montez,” and “Sad Man’s Tongue.”

Volbeat’s latest single “Last Day Under The Sun” has been perhaps the band’s biggest radio hit in a long list of many. Watch the video:


A giant black curtain with the band’s logo covers the stage, the lights get darker, and the intro music gets louder; then the curtain lifts. Needless to say, fans went absolutely berserk upon the appearance of Slipknot in the flesh. With eight band members all over the place, two drum kits elevated on either side of the stage, and a myriad of raised walkways across the stage that enabled the group members to magically appear in a totally different spot from where they just were a moment ago, you just didn’t know where to watch. It was fucking awesome sensory overload! Every musician is wearing white jumpsuits, and different masks, from Clown to Pinhead to almost human-looking, and every variation between.

Promoting their latest studio album, We Are Not Your Kind, fans in this city were blessed to witness the only Canadian stop on the Knotfest Roadshow. As if some kind of invisible tidal wave of crowd surfers was released, they just kept flowing over everyone and into the waiting arms of the many really big security guys, who really do an amazing job, if you ever take a moment and watch.

So far, I think Knotfest Roadshow has been my favourite concert of the soon-to-be-ending summer season.

“Birth of The Cruel” is an absolute monster of a track, and the third single from We Are Not Your Kind:

Slipknot’s sixth studio record, We Are Not Your Kind, was released on August 9th, 2019, via Roadrunner Records: