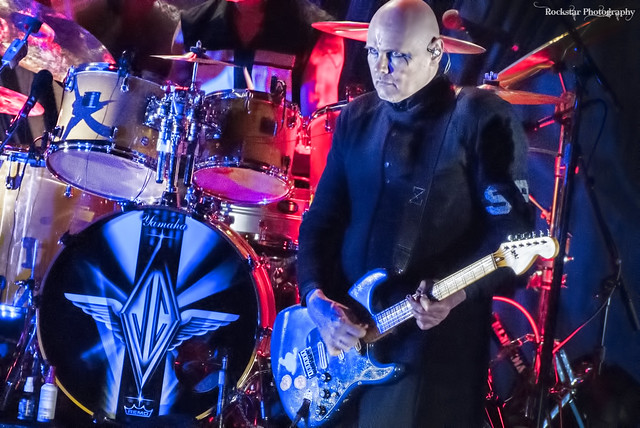 Chicago alternative rock legends Smashing Pumpkins took over Toronto’s Budweiser Stage for quite a “blast from the past” last Tuesday, along with English rock legend Noel Gallagher and his band The High Flying Birds, plus openers A.F.I..

Californians A.F.I. set the tone with a stellar set to begin the evening. With ten studio albums and ten EPs to their credit, A Fire Inside had no difficulty in finding material to keep us entertained and get everyone in the right frame of mind for the rest of the concert. The band are currently touring in promotion of their latest EP, The Missing Man, and the foursome displayed impeccable musical chemistry, playing off of each other and having a blast bouncing across the stage. A.F.I.’s first three songs were, “Get Dark,” “17 Crimes,” and “Snow Cats.”

Manchester, England’s Noel Gallagher (you may be aware of him from his previous band Oasis) along with his High Flying Birds were accompanied by a horn section and back up singers, which made for quite the comprehensive touring group. Gallagher had everyone on their feet, as he thrilled fans with recent songs such as “Fort Knox,” “It’s A Beautiful World,” and his latest single, “This Is The Place.” The last half of the set was reserved for some Oasis hits such as “Wonderwall,” and “Don’t Look Back In Anger” which received the desired crowd reaction. The final encore of Noel Gallagher’s High Flying Birds set was the Beatles hit “All You Need Is Love,” which left everyone with the warm fuzzies.

The music video for “This Is The Place” was just released this week. Check it out if you haven’t already, and if you have, well, watch it again:


You could tell by this time that people were eager for the headliners to finally hit the stage. Amid crowd chants of “Pumpkins,” the lights turned down and, one by one, the band made their way from backstage. Drummer Jimmy Chamberlin planted himself behind his drum kit, Jeff Schroeder carried out his bass, guitarist James Iha was next, and then there he was, Billy Corgan!

Touring in support of their Shiny and Oh So Bright, Vol. 1 / LP: No Past. No Future. No Sun., it was refreshing to see (almost) the original band lineup together again (with, of course, original bassist D’arcy Wretzky missing). The Pumpkins blasted right into some familiar fan favourites, officially turning this Tuesday night into a party! It’s always fun for me to turn around while photographing a band, and take in the “fandemonium” from the front of the stage! The thing I noticed was that everyone was on their feet. People up on the lawn, people with seats, and everyone down on the floor. This sea of rock fans all standing with raised fists and loving this night of great tunes as one, proving once again that rock music knows no borders. In that one moment, everyone, regardless of age, race, religion, or gender, was in tune with the cosmos and that song that magically transports you back to a time that was so special to all of us! It may not be the ‘90s anymore, but this show sure made you long for the good old days again.

Watch the kind of creepy music video for one of the Pumpkins’ most recent singles, “Solara:”