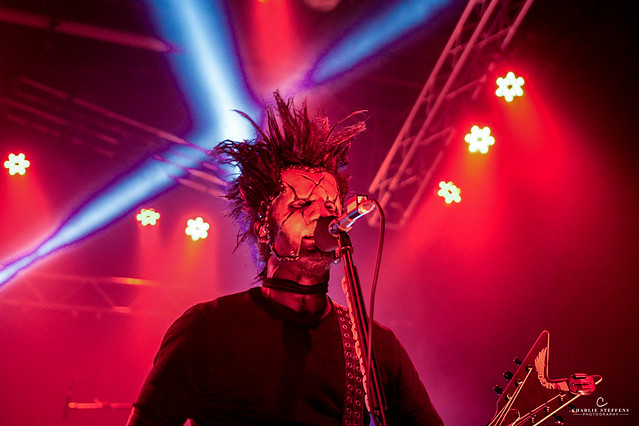 Primed by the earlier sets from Wednesday 13 and Dope, a throng of metalheads in the sold-out Observatory began thrashing and stage diving a minute or two into DevilDriver’s set. Vocalist Dez Fafara encouraged the non-stop madness by hugging the fans who had made it onto the stage. DevilDriver played favorites, along with a couple Coal Chamber cuts. The California groove machine virtually pummelled the place, capping off an intense set with the always crowd-pleasing “End of the Line.”

Released as part of the guest-filled 2018 Outlaws ‘til the End: Vol. 1 album, here’s the music video for “Ghost Riders in The Sky:”


Discerningly deciding not to use a hologram to project an image of Static, Xer0 instead made a living facsimile to Wayne, who passed away in 2014. The band opened big and loud with “Bled for Days,” and the crowd responded with loud approval, jumping up and down while singing word for word. Donning the trademark porcupine quill Wayne Static hairdo, Xer0, wielding his guitar, sang the songs and crunched out chords much like the classic incarnation of Static always did.

Campos thrashed about the stage, laying out chugging basslines and backing, while Fukuda ripped on the guitar while engaging the audience. The power and changing tempo of Jay’s drumming made the room move. “Start a War,” a fast and furious mingling of industrial and nu-metal, incited mayhem on the Observatory floor. “Push It” clinched the night. Static-X delivered a strong performance on this evening that was not only ever-relevant but a respectful homage to its prime mover.

As we await the release of their new album Project Regeneration, here’s the classic video for Static-X’s “I’m With Stupid” from Wisconsin Death Trip: