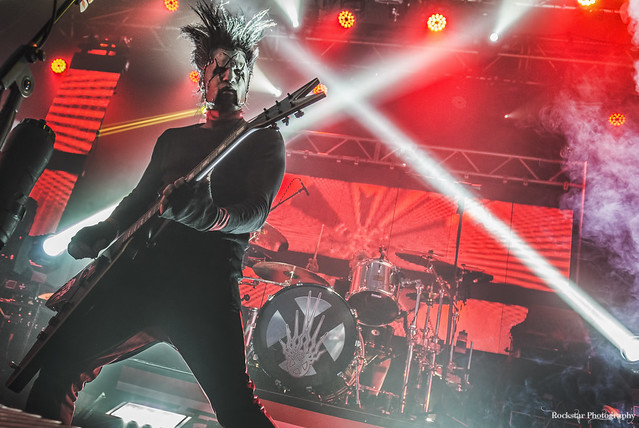 It’s another Tuesday night in Toronto and another sold-out show at The Opera House! Los Angeles’ Static-X are on their Wisconsin Death Trip Tour and have brought along with them Santa Barbara’s DevilDriver, New York’s Dope, and Wednesday 13 from North Carolina. I overheard one concert-goer mention that The Opera House is his favourite live venue for a metal show. And you know what? I think I’d have to agree with him.

Wednesday 13 started the evening for us with their ghoul/horror punk/metal stylings. Considering the last Wednesday 13 show I saw was acoustic, holy shit, was I ever in for a treat. These guys have the whole shock rock thing down to absolute perfection, working and interacting with the crowd ensuring sure that everyone is having a blast. The first three songs from the Wednesday 13 set were; “Hail Ming,” “Get Your Grave On,” and “Zodiac.”

Next up to the stage were Dope from New York City. Featuring Edsel Dope (vocals), Virus (lead guitar), Acey Slade (bass), and Daniel Fox (drums), they definitely held their end of the bargain and worked the crowd into even more of a frenzy.

Static-X released a teaser video for their upcoming record Project Regeneration last fall, complete with clips of bassist Tony Campos detailing the collaborators to be featured on the album:


The third and (my personal favourite) band of the night was DevilDriver. The group hit the stage like a tsunami of flying hair and thrashing guitar riffs, led by Coal Chamber vocalist Dez Fafara. A little known piece of trivia for you; Dez’s father played Tooey and his uncle played Whitey on the classic 1960s TV sitcom Leave It To Beaver. Dez was joined on stage by guitarists Mike Spreitzer and Neal Tiemann, Diego Ibarra on bass, and drummer Austin D’Amond.

These guys never fail to get feet stomping, fists in the air, heads banging, and as if on queue, here come the crowd surfers! I think DevilDriver could convince the World Olympic Committee to add crowd surfing as a new Olympic sport. At one point in their history, DevilDriver even attempted to record the world’s largest circle pit at the 2007 Download Festival, but Guinness (not to be confused with the beer) stated that there was no way to confirm where a circle pit starts and ends. Guinness record or not, this band kicks serious ass in this photographer’s opinion! They began their set with “Ruthless,” “Grinfucked,” and “Cry For Me Sky (Eulogy Of The Scorned).”

The final set of the night was, of course, left for the for headlining Los Angeles industrial metalheads, Static-X. I must say, this was an interesting one. I had never seen the band before prior to this evening so I was unsure of what to expect. Since the band’s original vocalist Wayne Static passed away towards the end of 2014, the band, along with a mysterious new lead singer simply known as Xer0 wearing a Wayne Static mask took the stage, noticeably with a couple of teleprompters.

Check out the promo video released by the band in the early spring for this summer’s 20th Anniversary Wisconsin Death Trip World Tour:


They are currently on a worldwide tour in support of their upcoming album Project Regeneration which is to be released later this summer, as well as the 20th anniversary of the album Wisconsin Death Trip. Project Regeneration marks the band’s first album in a decade and the first since the death of Wayne Static and will feature the last recordings of Wayne Static along with the original “Wisconsin Death Trip.” Overall, Static-X delivered a high-energy set, illustrated by the flow of crowd surfers that just continued to get larger and larger. It was very obvious that everyone was having a blast, and I think this is will turn out to be a very successful tour for everyone involved.