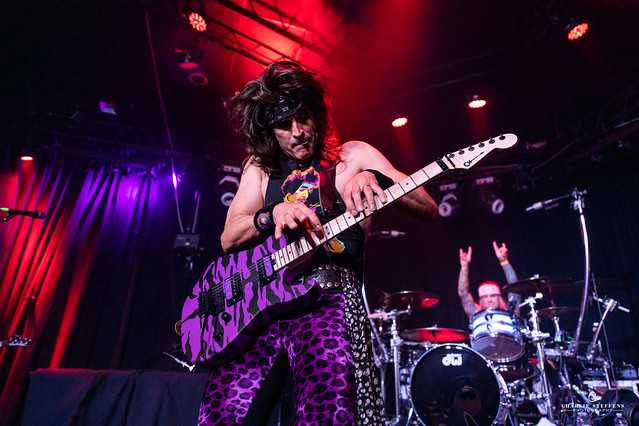 This not going to be a neutral, unbiased review. I am an unabashed Steel Panther fan and I don’t care who knows. What I have always loved about this band, besides their guitar-driven, infectious sound, is that they don’t take themselves too seriously. Since their beginnings on the Sunset Strip about 20 years ago, they have played a balls-out rock show delivered with top-notch musicianship. Before they signed a major record deal in 2009, the consensus among some metalheads was that Steel Panther was just a band who played ‘80s hair metal covers. So, for the cognoscenti, driving up to West Hollywood on a Monday night to see four mascara-wearing, long-haired dudes garbed in spandex was subject to question.

However, those who were at the Whisky a Go-Go last Thursday would argue that point, especially the first-timers. Playing for a sold-out crowd, Steel Panther threw a party to celebrate the release of their fifth album, Heavy Metal Rules.

Right from this evening’s show at Whisky a Go Go is a live video of the band performing “I Ain’t Buying What You’re Selling:”


“All I Wanna Do is Fuck (Myself Tonight)” kicked off the party, and the crowd sang along with frontman Michael Starr, lithe in black leather trousers and wrestling boots, working the stage like he owned the place. The banter between Satchel (guitar), Lexxi Foxx (bass), Stix Zadinia (drums), and Starr was outrageous and hilarious. Then, aiming at the audience, it was an equal opportunity insult fest, leaving no PC stone unturned.

The setlist of fifteen songs included five tracks off the new record. “Always Going to Be a Ho” proved to be instantly classic played in a live setting. “Fuck Everybody” gave the room a display of Zadinia’s skillful drumming. He and Foxx together make a tight and thunderous rhythm duo. Steel Panther likes it loud. After rocking the house with “Poontang Boomerang,” Satchel took the stage and played an arresting guitar solo. His physical agility and command of the guitar is right up there with the best of ‘em.

“I Ain’t Buying What You’re Selling,” another song from Heavy Metal Rules, was received warmly by the crowd, though many may not have anticipated hearing such a pensive, slow-tempo tune, cloaked in reflection. The interlude was an unexpected highlight of the evening.

Netlflix and chill solo and watch “All I Wanna Do is F**K (Myself Tonight).”


Playing bigger venues where they can run around and move in sync, the Whisky stage was limiting. Starr, Satchel, and Foxx, therefore played upfront, often leaning over to high-five the fans while belting out lyrics unfit for terrestrial radio. For many, the draw of Steel Panther’s music is its explicit, let’s just call it filthy, content. That, with a deliberate like many of bands, wore in the ‘80s, had previously typecast them as a rock parody.

Upholding tradition Satchel and Starr invited girls in the audience to get on stage for “Party All Day” and “17 Girls in a Row.” In keeping with the Sunset Strip tradition, bare breasts have always been encouraged at Steel Panther shows and the night did not disappoint. “Community Property,” “Death to All But Metal,” and “Gloryhole,” their popular triad, closed the show.

Rude antics on stage, lyrics celebrating debauchery, and topless women dancing with the band may all be part of the draw, but Steel Panther’s prowess as musicians is the clincher. The mayor may someday give them a key to the city, but they are already the Strip’s true ambassadors.