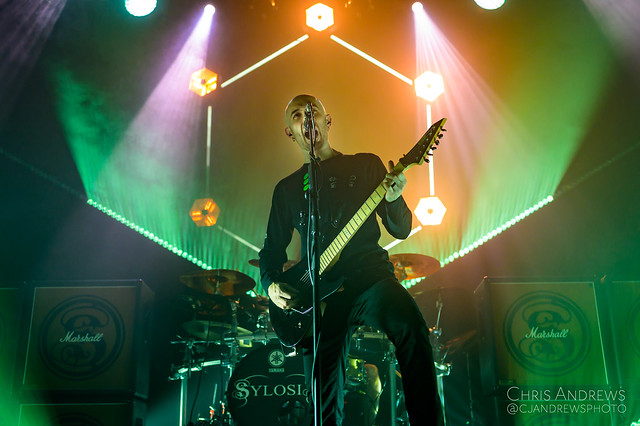 After four years or so away, Sylosis are back in a big way with a long sold-out show at London’s Islington Assembly Hall. Just six days ago they released their finest album to date in Cycle of Suffering, on ever-present label Nuclear Blast, and with a swathe of gigs across Europe and festival appearances already set up, 2020 could be the year the Reading thrashers kick on even further than before.

Opening the show tonight are Dyscarnate; England’s answer to Whitechapel and that being meant in an entirely complimentary way. With that in mind, it’s no surprise to see they’ve just been announced as main support for the Tennessee bruisers’ forthcoming UK tour. Technical difficulties delay the start of their performance, but when they do begin there’s no time wasted before ripping into their groove-laden death metal. The noise coming from just three members on stage is astonishing and gets heads nodding and fists pumping from front to back of the room. Within their set, they give a live debut to the ominously lumbering “Nothing Seems Right” off 2017’s excellent With All Their Might, where the right-handed chugs of guitarist Tom Whitty sync perfectly with Matt Unsworth’s double bass drums. Set closer “This Is Fire” (aptly describing the track’s quality as well) opens up a violent pit in the middle of the crowd, and the bouncing of those in attendance can be felt through the floor throughout the venue. It’s a ridiculously tight set from the Sussex trio.


Frontman Josh Middleton has been no stranger to the stage during the time of Sylosis’ hiatus, having stepped into guitar duties for Architects in tragic circumstances, firstly temporarily and subsequently joining as a permanent member, and his experience on stage shows as he immediately holds the crowd in the palm of his hand right from the opening notes of “I Sever.” New bassist Conor Marshall (also of the excellent Conjurer; whose members are in attendance tonight) fits straight in with the band’s musical style and is a whirlwind of hair and smiles throughout the set. The comparably veteran other members completing the line-up on stage are Ali Richardson who slays the turbo rhythms of the band’s tracks behind the kit and rhythm guitarist, a criminally short sell of an extremely talented musician, Alex Bailey.

Middleton and company are further aided in their attempts to amaze tonight’s audience with an incredible lighting rig resembling the symbol on the cover of Cycle Of Suffering, with the show being put on a production which wouldn’t look out of place on a stage many times this one’s size. As they rip through their set it’s somewhat surprising that only three tracks of the fourteen they play come from their latest release, but it’s completely welcome for those in attendance to hear a true “greatest hits” set on their first show in a long, long time. Necksnapper “Teras” off 2008’s Conclusion of an Age gets the party going even harder early in the set, and with each track being reproduced flawlessly by the members on stage there’s nothing but constant positive momentum throughout Sylosis’ performance.


After briefly departing prompting deafening chants from the audience, the band return to the stage and launch into bonafide anthem “Conclusion Of An Age,” with the crowd audibly singing along with the main guitar riff louder than the band themselves and shouting lyrics back at Middleton. Closing out with “Empyreal,” the audience are left somewhat breathless by what has been a mind-blowing performance. It feels like Sylosis have never been gone, but it is so good to have them back.