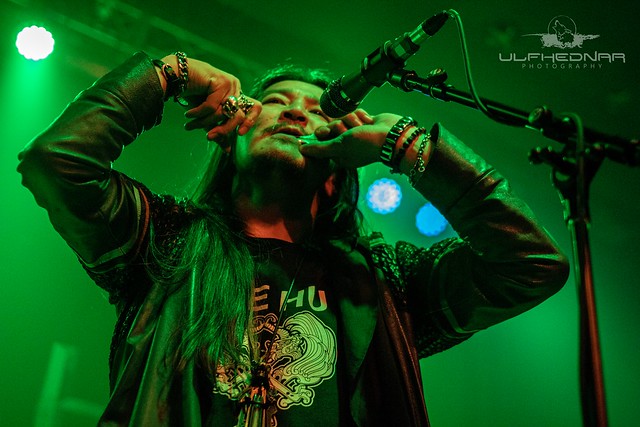 The cool fall nights had been descending upon Kansas recently, and especially so this evening of October 29th before entering The Granada Theater in Lawrence. The weather wouldn’t have been so bad if the line wasn’t already extended halfway down the block, people of all ages ready to enter and see Crown Lands, and especially The HU.

The HU is a Mongolian metal band that recently formed in 2016, using traditional instruments in their music, much like folk and atmospheric metal bands of other varieties (Wardruna is a great example). They are also known to use Mongolian throat singing in their music, which provides a unique texture to their compositions. This, combined with their unique take on “rock and roll,” easily propelled the band to immediate internet popularity, amassing millions of views over the course of three or so years. They announced their first-ever North American tour in early 2019, immediately selling out large and populated venues. I was overly excited to see one of their stops nearby, and in a decently-sized venue as well.

For all things Crown Lands, their song “Mountain” is an awesome place to start:


Once inside, the place was already packed. As mentioned before, there was a surprising range of age groups present. Seeing the younger crowd didn’t hit me as hard as seeing some of the older folks there, some looking like they were in their 60s and 70s. It had been quite a while since I’ve seen this wide range of different people in one area, even for music. Crown Lands began taking the stage, and because I wanted to be surprised for the show, I didn’t do much research beforehand so I could experience them with fresh eyes.

Crown Lands only consists of two members, Cody Bowles on drums and vocals and Kevin Comeau on the guitars and synths. You don’t see bands that are just duos that often, the only other one I’d seen was Worldsucks last year. Their set began and I was immediately blown away by how massive their sound was and also how different they were from the headlining act, The HU. Describing their sound, I’d say they definitely wear their influences of Rush, Queen, and undoubtedly Led Zeppelin. They’re basically a better Greta Van Fleet, but by miles. Their set didn’t last as long as I thought it would, but it was explosive and fun nonetheless. Cody Bowles behind the mic and kit was a sight to behold, as I haven’t seen many drummer/vocalist combos in recent times. Their opening to The HU got the crowd roaring and transfixed onto the stage in quick fashion and more than likely made many fans as they left.

Featuring From Ashes To New, check out the latest music video from The Hu for “Yuve Yuve Yu”:


The HU took the stage soon afterwards. The lights dimmed and members took the stage with the crowd filling the venue with shouts and cheers. Eight total musicians made themselves present, the front four being the core members of the band while the back consisted of touring support. The HU brought forth an incredible energy right from the get-go starting off with “Shoog Shoog,” which begins with a chant drawing in the crowd until the instrumentals began. As mentioned before, The HU use traditional Mongolian instruments in their music, most notably the Morin khuur (also known as the horsehead fiddle) which is considered as a major symbol of the Mongolian people. These comprised of the front line, along with the jaw harp/tsuur player that also contributed a lot of the vocals, and the tovshuur. The supporting lineup in the back contained support percussion, guitars, and bass.

Altogether, the sound was amazingly well-executed, where one instrument/lineup didn’t overshadow the other in most instances. One of the elements that intrigued me the most about The Hu was the throat singing aspect of their sound. While I know this is pretty common in the area they hail from as well as the surrounding areas, you don’t often get to see it performed first hand at such a capacity. With how amazing the sound was, hearing it in person was even better than listening to their music on the computer or CD.

Make sure to also check out the music video for “Wolf Totem”:


The performance lasted for close to an hour and a half. Brief pauses were had, the crowd changing “Hu, Hu, Hu” after every few songs. Even with all the energy, there weren’t any mosh pits forming that I could see. This is how commanding their presence was, as you didn’t want to take your eyes or ears away from the craftsmanship showcased. I have no doubt that The HU will be back to the States and will be dominating the even bigger venues. While they are currently at the top of their game in the music scene, I can only see them going even further. This a show you can’t miss.