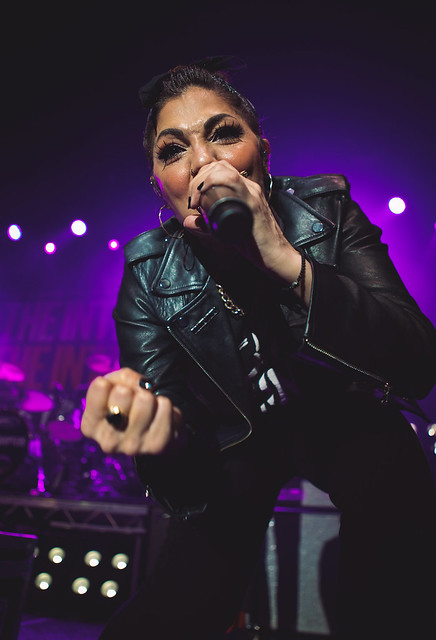 The recurring themes of the night as The Interrupters visited Manchester were pure joy, unity and bounciness. The floorboards of the O2 Ritz were given a strenuous bounce test as a result of 3 incredibly danceable bands bringing the party energy.

First up the cheeky ska punk of Buster Shuffle got the feet moving. With their anthemic and singable tunes, delivered with a smidge of Madness-esque story telling, they were the perfect opener. Full of energy and personality and shouty singalongs the set they mood for the evening and were extremely enjoyable. They even threw in a bit of The Prodigy’s "Out of Space" in for good measure.

Next up were The Skints who are clearly already a crowd favourite. This comes from a combination of them being one of the hardest working bands on the planet, and them playing some absolutely beautiful tropically-tinged reggae that is full of soul and has beautiful harmonies - with Marcia, Jamie ‘this tours best singing drummer™’ and Joshua combining to give you goose bumps. The rapid fire of "Ratatat" and the groove of Dawn Penn’s "No, No, No." were early highlights but with the breadth of material they now have after 4 albums the whole set was full of magical moments. "Lay You Down" is always fantastic, and the complete set combines to create joy in the room. Multi-instrumentalist Marcia covers everything from keys to saxophone to flute and even guitar alongside her vocals and is mind-blowingly talented at all of them.

There’s a massive cheer for them as they finish and rightfully so. If you’re not having a nice time at a Skints show, then there’s something wrong with you.

Having been a massive Rancid fan for years I was introduced to The Interrupters through their ties with Tim Armstrong and his Hellcat Records label. I knew they were great and having seen them support Green Day a few years ago I was looking forward to what was always going to be a high energy, bouncy festival of ska music.

The fact that it was Aimee Interrupters birthday raised the adrenaline levels and party vibes to a whole other level though. As the band took the stage the whole crowd spontaneously broke into a rendition of Happy Birthday which visibly surprised Aimee.

With a bunch of stomping ska anthems including "A Friend Like Me", "Take Back the Power" and "Be Gone" heading the way before a brilliant version of Billie Eilish’s "Bad Guy" the band had everyone in the palms of their hands. The brothers Bivona’s personalities shone throughout the night, with lead guitarist Kevin being the main ringleader, winding up Aimee at every opportunity and calling his brother the ‘second best singing drummer on this tour™’.

As Aimee states The Interrupters play unity music and looking at the audience it’s a beautiful mix of ages, races and sexes, and it’s always good to see perfectly coiffured mohawks out on the town for the night. It’s truly the music that unites everyone and whether it’s in the circle pits, the Oi! Oi!’s or the wall of death (that is the crowd’s birthday gift to Aimee) this audience is one. Together. Having fun. Smiling. It’s beautiful to be a part of.

With 8 or so different styles of Happy Birthday including a screamy metal version and a quick rendition of "A Message To You Rudy" as Kevin introduces the rest of the band it’s clear they’re custom built for a venue like this. "She Got Arrested" and a shouty "Gave You Everything" close out the main set but the band don’t leave to come back on and just carry on playing another three songs to end what was a magnificent show.

You could go and see any one of these bands individually and have a fantastic night out, but the combination of all three of them on one bill made for something special. I would imagine it’d be a birthday party that Aimee remembers for many years to come.

Check out the music video for “Gave You Everything” from The Interrupters’ most rcent record, Fight The Good Fight: