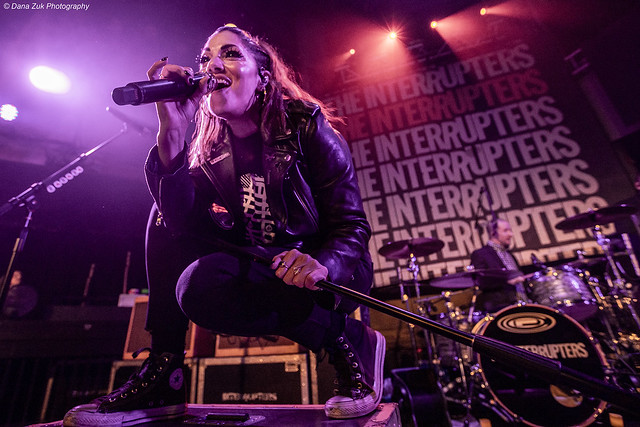 Punk rockers and ska lovers of all ages flocked to Edmonton’s Union Hall on Tuesday night, eager to catch the buzz on L.A.’s very own, The Interrupters, on their first Albertan stop of the Fight The Good Fight Canadian tour. Despite the results of the previous evening’s federal election, Edmontonians put their views aside to dance, sing, and forget about politics for the evening.

The Interrupters kicked off their set by breaking into “A Friend Like Me” which inevitably caused an eruption of singing voices from the all-ages crowd surrounding the stage. Shifting the audience’s gears from singing to dancing, “By My Side” was the next track to come booming from the monitors, causing frontwoman Aimee Allan to shake hands with those pressed against the barricade while dancing along to the song, before taking a moment to thank the folks who gathered in the south side venue on a chilly autumn night.

Guitarist, Kevin Bivona, addressed the crowd with a message saying: “This next one is for anyone who’s ever had something they love taken from them, or who has been told you can’t do something because of who you are. To the LGBTQ+ community, this one is for you!,” before leading Aimee and his band of brothers into “Take Back The Power,” and then grooving into "Title Holder,” the opening track off of their third and newest record Fight The Good Fight.

After the success of their recently-released cover of “Bad Guy” by pop superstar Billie Eilish, it was inevitable that this song would pop up somewhere during the set. The youth in the audience went bananas for this track and looking around the room, even the older ska and punk rock veterans could be seen bobbing their heads and mouthing the words to the massively famous track.

Check out the recently-released in-studio music video for The Interrupters’ cover of Billie Eilish’s “Bad Guy:”


Though their set consisted of 22 songs, a healthy mix of new tunes and deep-cut tracks which the band doesn’t play all that often, specifically requested by their friends and fans online, the group took to ending the night on a high note with a fresh track. Allan and the three Bivona brothers slammed into “She’s Kerosene” which once again, caused concert goers to lift their voices, so loud that at times it was a struggle to hear the band. The Interrupters warmed the souls of countless punks, both old and young, on their first-ever headlining show in Edmonton, delivering a performance that was nothing short of invigorating for those in need of a really nice release.