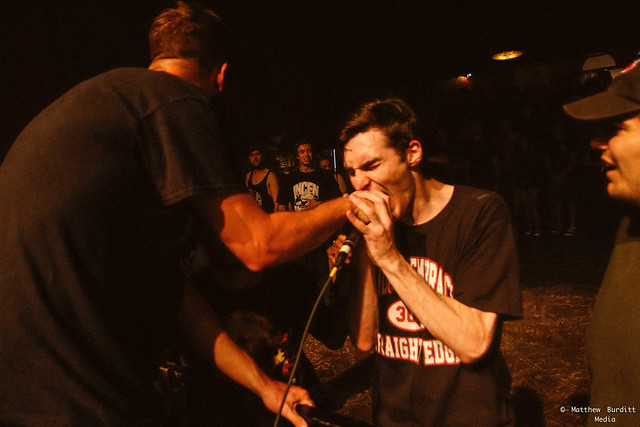 On July 27th, the Pure Noise Records tour made its way through Toronto’s Opera House. With a lineup this good, featuring headliners Stick To Your Guns and support from Counterparts, Terror, Sanction and Year Of The Knife (YOTK), it was a show at which to be present from doors ‘til the last note.

YOTK started off the night. The newer, straight-edge band from Delaware didn’t exactly play to a packed house but with the fans in attendance being dedicated ones, and vocalist Brendan Mullen spending a pile of time in the audience, it was a sight to see. Just about every fan would rush to the barricade for the big moments or take a break from all the swinging; back and forth it went.

Sanction followed and the violent moshing did not stop. The band dropped their full length, Broken In Refraction, the day before and the audience was ready for it. From watching the crowdkills to being sprayed by beer during a stint in the photo pit, my first live experience with this band was one I looked forward to for weeks and it didn’t disappoint.

Take a listen to the wild sound of Sanction with the song, "Sixhundredthirtyone:"


Things were taking a hardcore beatdown turn in the crowd, but then Terror came in to save the day. Anybody who is remotely familiar with the hardcore legends knows vocalist Scott Vogel is all about crowd participation. They want you to mosh, they want you to crowd surf, and jump on somebody’s head, but in a positive way. That did take an abrupt turn when the group stopped mid-set due to a mix up between security and a fan getting a bit too into it. With Vogel being the wordsmith he is, the fan and security worked it out (or at least came to a stalemate) and the show carried on as usual.

Counterparts were set to play their “hometown” show (Hamilton is about an hour drive from Toronto but hey it’s close enough) and this is when things really started to pick up. Nine times out of ten you attend one of their shows around here and it goes off. Playing a whole bunch from 2017’s You're Not You Anymore, as well as a new song, for which they’ve already made merch for, the five-piece just about stole the show. With the obviously dedicated crowd and vocalist Brendan Murphy’s cheeky banter between songs, their 35 minutes or so on stage stood out from the rest.

Fresh off the presses, check out the music video for "56" from Stick To Your Guns' new True View record:


Now it was time for Stick To Your Guns to close the night out. Vocalist Jesse Barnett came out repping The Tragically Hip and got off to a quick start with impressing the crowd. Playing a little bit of something from every release, the group put on a show that reminded us why the group is still relevant after all these years. From the general stage presence to Barnett's takes on current events unfolding around the world, they made themselves heard and we listened.

The Pure Noise Tour is absolutely insane. There’s no other way to describe it. The bill may look like just a bunch of “screamo” bands to some that maybe aren’t as familiar with the genre, especially when you consider that Pure Noise is also home to many thriving pop-punk bands, but you get a taste of everything that’s hot on the scene at the moment with this tour. You’d be a fool to miss out on this night.