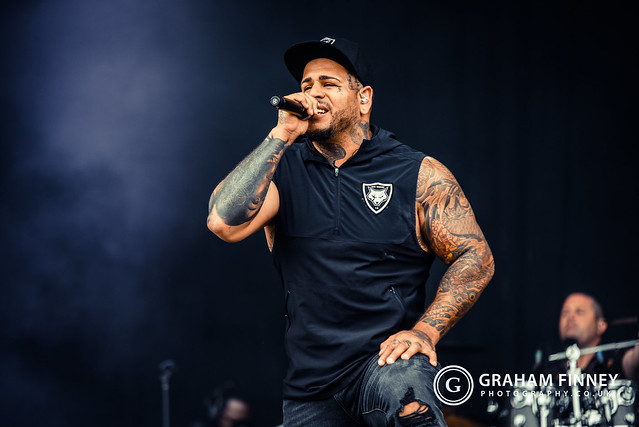 Having survived day one of Download Festival, things really started to get going on Day Two as the mighty masked rock heayweights Slipknot rolled into the festival for their first UK performance in a few years. Thousands upon thousands of maggots descended on the festival site for a day of great music headlined by one of the biggest metal bands the modern generation of music fans has seen. Here are some of our highlights from day two.

1. Skindred - the ultimate Festival band
- As always, Skindred played a kick-ass show entering the stage as they usually do to "The Imperial March" from Star Wars. Of course, if you have seen them as much as I have over the years, this intro may have become stale. Not for me though, I love Star Wars and I’ll never get sick of hearing that tune! True to his fashion, Benji Webbe was kitted out in his recognisable garb of a patched-up leather jacket, military hat and spiked shades. Despite the rain, the fans are having the time of their lives so much so, you can see the spray from soaking wet clothes raise up. Webbe, being one of the most charismatic frontmen today churned out some of the bands best hits including a touching tribute to the late, great Keith Flint with a cover of “Out of Space”. Being veterans of Download festival, it’s clear why they are on the bill as often as they are!

2. Bullet Bourbon Tent and it's bourbon laced entertainment
- Ok, now this was within the VIP area of the festival but, if you had access, then you know the joy of these bourbon cocktails, delicious and dangerously strong! Adding to the fun, the "Spin the Wheel" game added some extra fun to the intoxicating atmosphere. With myself and my band of literal merry men (and women) we gave it a spin with some winners, some losers and, in my case, big losers when I landed on the wet fish slap forfeit to the joys of delight of my friends who got to witness this humiliation. Getting out of the rain for a bit as well as topping up our blood / alcohol level offered a well needed break from the main arena.

3. Behemoth taking extreme metal to the masses
- For those who are passionate about their rock and metal, the diversity of festivals like Download is second to none. However, while a band like Die Antwoord might not sit comfortable with some diehard metal fans, a band like Polish brutalists Behemoth most certainly do so it was a joy to behold to see Nergal and his henchman absolutely annihilating the mainstage with their black metal tinged rage. Brutal from the offest, the Polish heavyweights have seen their profile rise over the past couple of years and, given the opportunity to maul this packed mainstage, they most definitely showed why extreme metal had earned a spot on the mainstage.


4. The return of grunge stars Stone Temple Pilots
- The Stone Temple Pilots delivered a solid set despite losing not one, but 2 frontmen over the years. Some might say that they should have called it a day back in 2013 with the loss of Scott Weiland, however, they continued with Linkin Park's Chester Bennington taking up the mantle of lead singer, a solid choice if there ever was one. Sadly, Bennington was also lost a few years back as well, so for fans of the band, the fact that they are still not giving up, is a testament to their resolve to continue playing together. During their set, Download was taking a pounding from the relentless rain but, about half way through, during either "Big Empty" or "Plush" (I can’t quite remember thanks to the Bullet cocktails earlier) the sky cleared just enough to allow the sun to shine through resulting in a bright rainbow across Download.

5. Halestorm smashing their second stage headline set
- Over the years Halestorm have built a dedicated fanbase mainly in part to their exceptional library of tunes but also to Lzzy Hale’s outstanding ability to draw fans to the band. With thanks to last year’s release of Vicious, Halestorm became one of 2018’s breakout bands elevating them to a position where they could headline the Zippo Encore stage and what a show it was! Lzzy and her crew dropped hit after hit to the delights of their fans including an a cappella version of the "Familiar Taste of Poison" and "Love Bites (So Do I)" with guest vocals curtesy off Asami from Lovebites, a Japanese band named after the aforementioned song. It really is a testament to Halestorm that bands across the world are influenced by them in such a way.

Here's precisely the reason why Halestorm were headlining the Zippo Stage at Download 2019:


6. Queen Zee royally rocking the Dogtooth Stage
- In a recent interview with Queen Zee, they told us they were as happy at home playing to a black metal crowd as they were to a Mel C crowd and, as they hit the stage on a day headlined by Carcass and featuring the likes ofBatushka and Underside, the Liverpool "queer rock" band certainly grabbed the attention of a packed out Dogtooth stage. Trashy, sleazy glam/punk rock is the order of the day for Queen Zee and their colourful set makes sure it has you hooked in from the very moment the mayhem kicks off. If you get the opportunity to check out these lot in a fleapit near you, make sure you do, you won't regret it!

7. Computer Game Themed Costumes
- Ok, so this doesn’t really relate to a specific day, but this year’s Download costume theme was computer games and there were some great efforts put in by a lot of folk this year. Of course, there was an abundance of Super Mario costumes, which let’s face it, is an easy to emulate look, and not particularly inventive but for every Mario and Luigi someone else had gone all out with their creativity from a troop of Fortnite cosplayers with exceptional attention to detail to my personal favourite of a father and son duo consisting of the Ghost of Sparter himself, The God of War, Kratos and his son Atreus. Again, exceptional attention to detail was paid to the creation of this look so kudos to whomever this was. I feel I must give a shout out though to the Flintstones, although not in line with the video game theme, this quartet could be seen rolling around in a purpose built car from the cartoon, it was just a crushing disappointment to see it abandoned due to the mud just outside the press tent by the second day.

8. Slipknot's long-awaited return to the UK
- Where to start? For a vast majority of attendees at this year’s Download, the band not to be missed was Slipknot and the show was everything you wanted and more! Corey Taylor and his crew did not disappoint their fans playing hit after hit whist proving that their stage presence is second to none. There was the moving percussion and drum platforms, insane lighting effects, oh, and of course, there was fire, lots of fire! As expected, during the encore and during "Spit it Out" Taylor encouraged Download to get close to the ground in preparation for the almighty “jump the fuck up” portion of the tune, 20 years on and this is still as strong as it was the first time it was ever attempted. Now, I must comment of Slipknots appearance, firstly Sid Wilsons look kinda resembled Emperor Palpatine from Star Wars, but more disturbingly, Taylor’s mask actually resembled Piers Morgan! I’m not sure if this was his aim, however, even if this wasn’t the look, he was going for it still created an aura of fear as their set became one of the most talked about of the weekend!

Footnote: These are just some of the highlights from Day Two but it would be unfair to miss out the many other great bands that play across multiple stages from slightly bonkers Underside to the shredding thrash of Japanese all girls metallers Lovebites to the return of Blink 182's Mark Hoppus and All Time Low's Alex Gaskarth and their new project Simple Creatures. Rain? What rain?