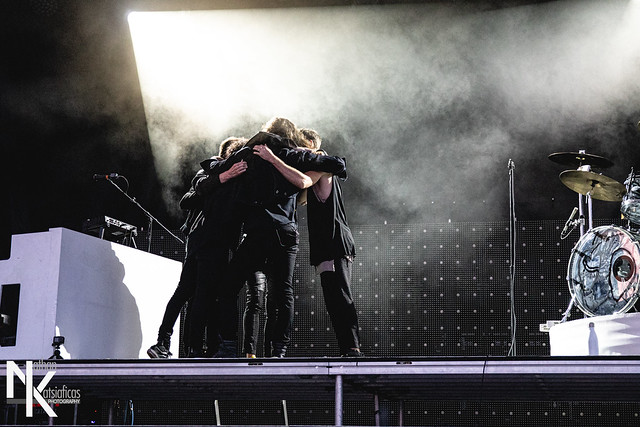 With a loaded lineup and ominous clouds above, Ra Ra Riot took to the stage at Thompson’s Point. They opened with their latest single, “Bad to Worse” while fans were still streaming in, drenched from the brief rain shower that had happened just five minutes before the concert began. Due to stormy weather pushing the starting time back, and perhaps mercifully (their set was less than enjoyable), they only had enough time for five songs. The band closed with what is currently their most popular single, “Water.” While the small crowd in front of the stage had some super enthusiastic fans singing along and dancing in muddy puddles, the majority of those in the venue were hiding under the roof at the bar, or in line at food trucks.

Luckily, Jimmy Eat World soon turned things around for the better. The band was much more energetic as they launched into their set with their 2004 hit, “Pain.” They quickly moved on to more huge fan-favorites, “Bleed American” and “Lucky Denver Mint.” By this time the rain has sufficiently stopped and the sunset becoming more and more spectacular, lifting the spirits of fans and band members alike. This was easily the best performance I’ve seen from Jimmy Eat World, they really do better on a big stage. The band would go on to play more hits before closing with their hit track, “The Middle.”

As if you don’t remember this one... Check out the music video for arguably Jimmy Eat World’s biggest radio hit, “The Middle:”


Finally, it was time for Third Eye Blind. The last bit of sunlight faded away as the band took to the stage. For the first few songs, they stayed up on the far back riser, playing “Screamer” and “The Kids.” From there, things just took off towards one of the most energetic sets I’ve witnessed in recent memory. Frontman Stephan Jenkins was an absolute athlete on the stage, bouncing around while he belted out each line. Yes, their music is great on record, but the live experience is on a whole other level. Hits like “Jumper” and “How It’s Going to Be,” went over as expected with the crowd.

At some point, Jenkins stopped to mention that the band was aiming to have a new album out soon and would be playing new material from it. They proceeded to play several new songs, which was all well and good except that, as a tour that was billed as bringing on the nostalgia, it was sort of lame to be confronted by a bunch of material that no one could possibly know the words to yet. It didn’t diminish their performance, but it definitely kept it from shining as brightly as it could’ve. Luckily, they pulled out one more old fan-favorite to bookend the night, with “Losing Another Year.” You can catch the Summer Gods Tour through August 3rd. The remaining dates are below!

Another blast from the past... Here’s “Never Let You Go,” a top 20 hit for Third Eye Blind: