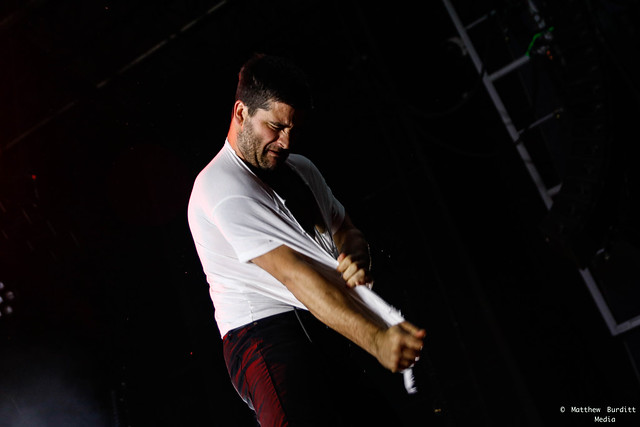 Is it safe to call them legends now? Well, we’re going with it anyway. Canadian rock legends, Alexisonfire played two massive June shows at Toronto’s Budweiser Stage, and boy was it a trip.

Seeing the St. Catharines band play at home has become something of an annual event, their last time being a four-night stint at Toronto’s Danforth Music Hall in December 2017, unless you count their appearance on House Of Strombo and the surprise three-song set at Toronto’s Rec Room alongside Chastity. But that is all in the past, let’s get into the big gig.

Opening the show was fellow Ontario band, The Dirty Nil. What makes this act so special is their ability to make every show they play feel like the biggest show in the world. While it’s a shame that the crowd was minuscule during their performance, the three-piece worked with what they had, blowing minds with their abrasive brand of rock n roll.

New York post-hardcore band, Glassjaw followed up and unfortunately fell victim to the same issue. Though they aren’t energetic on stage, the four-piece sounded perfect. Every note was played with passion and a little bit of flare, and it went noticed as they did get the crowd going a bit, preparing us for what was to come.

Released in February, “Familiar Drugs” is the first new Alexisonfire in ten years!


And now, the moment we had all been waiting for... Alexisonfire takes the stage, but not before the mascot of NBA champions, Toronto Raptors has his time to shine. It was the perfect way to add more chaos to the already chaotic crowd of close to 20,000. Playing a set spanning their entire discography, the band ever so casually did what they do best. Dallas Green graced our ears with his voice, George Pettit ripped a bunch of shirts off his back (I lost count at 5), Jordan “Ratbeard” Hastings absolutely shredding every part and of course, Chris Steele and Wade Macneil brought their electric stage presence that cannot be replicated. There, of course, was the indescribable craziness that always happens when the band close their shows with “Happiness By The Kilowatt” from 2004’s Watch Out!. A fan had come to the show bearing a sign reading “George, bend Dallas’ mic stand.” He delivered and then some, including his own to the party. From that, to Wade taping his guitar to the amp... So much goes on in that moment, it’s impossible to catch everything.

The boys brought the biggest and baddest “hometown” show you could’ve asked for.

One of the things that is so intriguing about the group is their lack of gimmicks. Even they can’t believe that it’s grown to what it is now, especially having broken up for a number of years earlier in the decade. But the way the five-piece acts on stage feels like how they would act in regular life. Pettit exposing his new back tattoo to his parents for the first time is a highlight of this and their general attitude on stage. You watch them and you know damn well they’re just as pumped as the kids who waited for god knows how long to be at the barricade to see the band we all grew up on.

If there was anything to be taken away from this night and from Alexisonfire in general, it’s the notion that anything can happen. As Macneil put it on stage, “If a band from St. Catharines can play two nights at the amphitheatre and the Raptors can win a championship, you can do anything!” That quote has stuck to this day. When you think about how crazy and daunting the music industry can be, especially for Canadian artists, taking a step back and thinking about what Alexisonfire have done is mind-boggling. As years go by and we think about the legacy of Canadian music, of course you’ll see Rush, The Tragically Hip and The Barenaked Ladies to name a few, but you better believe that Alexisonfire will be on that list, sooner or later.

“This Could Be Anywhere In The World” is one of the band’s biggest hits, off 2006’s Crisis.