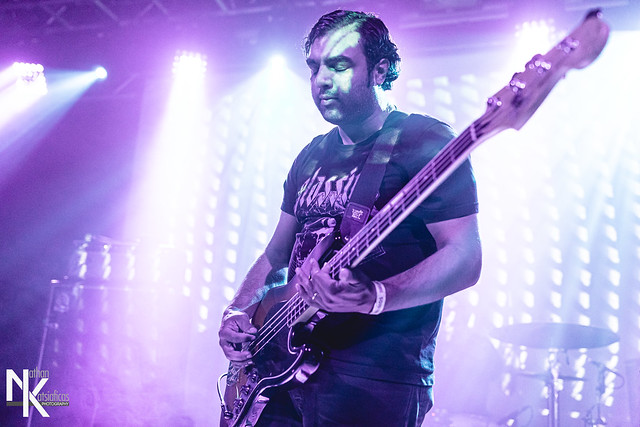 Texas post-rock instrumentalists This Will Destroy You (TWDY) just wrapped up a short, six-date West Coast run of the U.S. that saw them playing intimate shows with opener Amulets. The tour got off to a rough start on February 8th, with TWDY’s trailer catching fire en route to the show! We caught up with them on February 12th as they came to play a packed Neumos in Seattle, Washington.

Opening act Amulets, the solo project of Portland-based Randall Taylor, set the stage for the night with an ambient set filled with colourful visuals projected onto himself and the stage, building complex sounds from layered instrumentation and synth.

Randall joined headliner This Will Destroy You on stage, filling in for bassist Jesse Kees as the band opened with “The Mighty Rio Grande.” Weaving layer after layer they built massive soundscapes that, on their own, were enough to entertain but coupled with the visuals displayed, held the audience in thrall. The quartet moved smoothly through their set, playing several more tracks before eliciting a cheer from the crowd with the opening notes of their hit, “Dustism.” The whole venue swayed their way to the music for the rest of the night with TDWY playing a whopping eleven lengthy tracks from across their discography, there was something for every fan to love. If you missed this run, the band is playing the wild Psycho Las Vegas in August, and has a show in Phoenix, Arizona that was just announced!