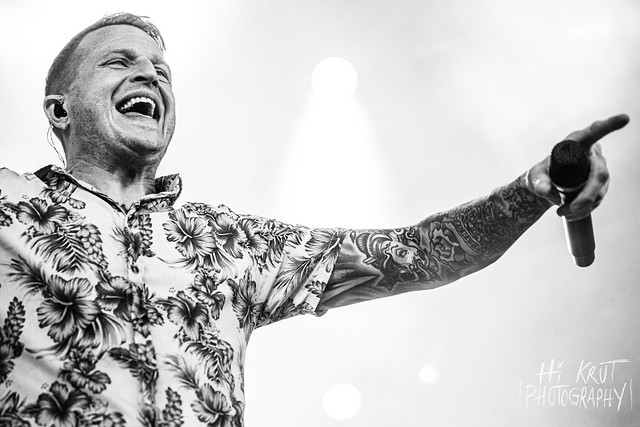 Have you ever been to a music festival where there were two stages, but you never had to choose between the bands you wanted to see? Or where you had the ability to upgrade your tickets for a meet & greet with your favourites? If you have experienced this amazingness, then you probably know about the Rockstar Energy Disrupt Music Festival.

You see, at the Rockstar Disrupt Fest, which came through Hartford, Connecticut at Xfinity Theatre on July 7th, bands play one at a time, filling up each passing hour with one to two artists. So you weren’t forced to make a decision you might later regret, or just sit in the hot sun with zero entertainment, waiting for the next band. With the way this works, you have enough time to run to the bathroom, grab food, or beverage and get right to the next performance.

The festival stage, which was located outside started around 1 pm, and changed with a new artist roughly every 30 minutes. Hyro the Hero kicked off the day, followed by Juliet Simms, and Memphis May Fire. Performances by Four Year Strong and Sleeping With Sirens wrapped the parking lot performances.

Check out more of the super-talented Hyro The Hero and his latest music video for “Never Back Down:”


It wasn’t until 6 pm that everyone moved indoors to the main stage area which was mostly covered by an overhang. Atreyu was the first band to take the stage. It was here that bands began playing every hour. The Story So Far, Circa Survive, The Used, and Thrice filled the rest of the lineup for this stage, each one putting on a highly enjoyable performance.

Anthony Green of Circa Survive climbed up on to the steps in front of the crowd in an attempt to get as close as possible, and everyone lost their minds over it. This seems to be a routine part of the act for Anthony, but you would never be able to tell that. Before the performance came to a close, he told the audience that his son was there and that aside from the crowd, this date of the tour was his favourite.

The Used really is a highlight to any lineup. When they took to the stage, it was in quite dramatic fashion as a white sheet was pulled to stretch out across most of the stage. Projected on to the sheet was an animated version of the Love and Death album cover, which collapsed to the floor once they walked on stage. More than once, singer Bert McCracken engaged with the audience, at first wishing their drummer, Dan Whitesides, a happy birthday, and again when he thanked the audience for the giving them this opportunity for the last 20 years to live their dreams.

To get a better idea of what you’re in store for with this awesome summer festival, watch this 2019 Disrupt Festival Tour highlight compilation:


From an audience point of view, this was probably my favourite tour yet. Access to food, water, and bathrooms was not at all limited. The crowd seemed relaxed, but feeding off each other as they crowd surfed and sang along to songs. The bands themselves all brought a great energy, parking was free, and everything ran on time. What more could you want?

If you too would like to have this experience, you have a little over a week left to catch the tour. Rockstar Disrupt will be rolling across the country with The Used, Sleeping with Sirens, Circa Survive, Sum 41, Thrice, Atreyu, and Four Year Strong. For most of the venues, tickets start at around 20 dollars, which is not a bad deal. However, if you are looking for a little bit of something extra out of your ticket though, you can purchase an upgrade. Upgrades vary greatly in pricing but can include limited edition shirts and posters, a laminate, side stage viewing of The Used, backstage tour, or a meet & greet with The Used, Sleeping With Sirens, Atreyu, or Memphis May Fire.

Check out the tour poster for this year’s edition of the festival: