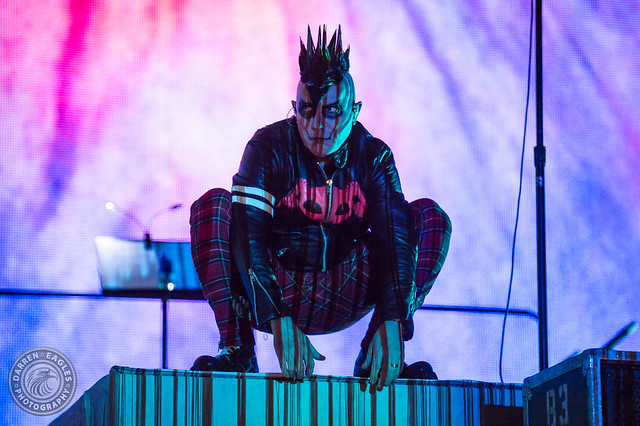 A two-night event that brought together music fans of all ages took over the Scotiabank Arena this past week. And even an early November storm for the ages couldn’t keep them away. Tool settled into the venerable Toronto venue and pounded their collective fists right through the hearts and souls of those in attendance. If you’ve never witnessed one of their shows, this review won’t really do it justice. Talking about the experience doesn’t do it either. There’s no other band to compare them to, no other band who brings the full package live experience, with imagery and sound that Tool does, and they’ve been doing it since the early ‘90s.

Opening the show was British post-punk band Killing Joke, a band who the likes of Trent Reznor and Ministry were listening to back in the day when creating their next level offerings. Jaz Coleman, Geordie Walker, Youth and Paul Ferguson, all original members of the band, took the stage along with keyboardist Roi Robertson and delivered a cranked-to-11, ten-track set of what made them household names in the genre back in the ‘80s. Coleman, dressed in black with heavy black and white face makeup, prowled the stage and growled out the goods for 30 odd minutes.

Perhaps the band’s most popular song, watch the music video for “Love Like Blood” from No Way Out But Forward Go:


Tool hit the stage from behind a full massive curtain made of thin strands of cord. Their projection system hit and shone through the curtain, bathing the band in textured light and shapes. Opening with the title track from their new album, thirteen years in the making, Fear Inoculum set the tone for the ride we were in for. The album is a masterpiece and hearing the band pull off the complexities and nuances contained within it live, is something special. Tool are masters of the 10+ minute opus and Fear Inoculum is full to the brim with this level of artistry. With song lengths like this, the two-hour set can’t possibly get all the favourites we’d like to have heard included, but the cross-section through most of their catalogue was perfect.

Maynard James Keenan was positively animated and lit-up like he hasn’t been since the -90s. Moving from high platforms on either side of Danny Carey’s kit, sometime across the front of the drum riser, Maynard, sporting a black leather jacket emblazoned with his side band Puscifer’s Queen B logo, red plaid pants, and a rock-solid punk mohawk, he rocked, swayed and crouched his way through the material. Carey’s kit is equal parts acoustic drums, electronic pads and every cymbal and percussive tool he can fit on the stage. The guy is truly a machine. A few songs into the show and the curtain was drawn back and the full onslaught of lasers and enough lights to blind you from the parking lot were unleashed. And no Tool show would be complete without the giant video screens full of Alex Grey and Adam Jones imagery that takes the words creepy and unsettling to another level.

Guitarist Adam Jones and bassist Justin Chancellor together form a cohesive force, doling out the math-driven time signature-based wall of sound that most groups would need many members to achieve. Normally I mention fan favourites from the setlist. In this case, every single song had the fans on their feet, jumping, dancing and fist-pumping their approval. The state of the art sound system made it impossible not to have the music fully penetrate the body, and everyone in the building was on the same glorious trip. Do yourself a favour and hit one of the remaining tour stops. This isn’t a rock show you’ll soon forget.

Watch the music video for “Schism” from the 2001 album Lateralus: