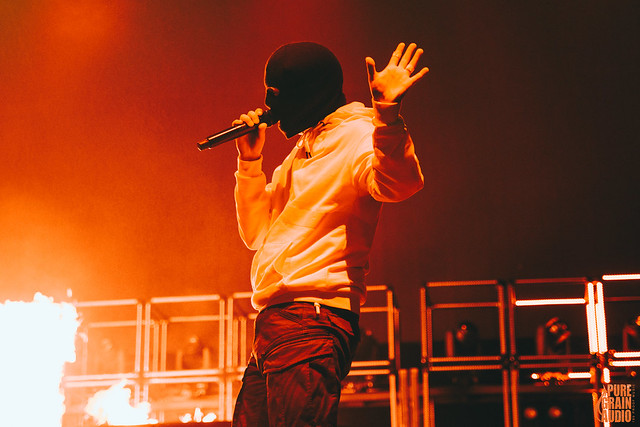 American Airlines Arena hosted Twenty One Pilots in the Miami area just seven months after their leg one performance in Sunrise last November. Given the numbers that the duo pulled last Saturday, you would think it was their first time back in over a year.

The show kicked off with Bear Hands, a Brooklyn, NY-based group with a unique stage presence. While the venue was noticeably empty during their performance, they still gave it their all with a nine-song setlist. They opened their dimly lit, moody set with “Back Seat Driver (Spirit Guide),” one of their popular hits. With old and new mixed into their set, they played fan favorites “Agora” and “2AM” as the venue continued to fill up before the Ohio duo took the stage.

Despite being 15 minutes late, Twenty One Pilots put on an unforgettable set. Drummer Josh Dun emerged after the curtain dropped and walked down the catwalk and to each side of the stage holding a flaming torch to signify the beginning of the set. The old Cadillac set aflame and confetti shot out to the crowd during the band’s opening song, “Jumpsuit.” Classically, both Dun and Joseph were covered nearly head to toe, only showing their eyes (and mouth for Joseph) during the first and second song, the latter being “Levitate.” Joseph stayed atop the flaming car for majority of the first two songs, occasionally moving to Dun’s drum set and taking a quick trip down the catwalk before returning to the back of the stage.

If you’re feeling “Stressed Out” then you should probably watch this video:


During the band’s third song, “Fairly Local,” an incredible light show began and Joseph’s double fell off the flaming car, where the real vocalist then appeared at the right side of the 100s section for his classic stunt. Right before the song ended, he pulled his mask off exposing his face and quickly made his way back to the stage to perform the rest of the 23-song set. The group’s setlist consisted of a great blend of old and new, but older fans of the duo still long for the addition of more older songs. Fan favorites “Stressed Out,” “We Don’t Believe What’s on TV,” “Holding on to You,” and the infamous show-ending “Trees” were amongst the infectious set.

Upon looking down into the general admission floor and all around the venue, an endless sea of black and yellow attire to match the Bandito theme reminded us all of just how strong the “Clique” is and will always be. The band has yet to lose their touch, and continue to put on an authentic performance. They never missed the chance to take a quick break to express their gratitude and thankfulness to their loyal fans for allowing them to do what they do.

It will be interesting to see what tricks are up their sleeve for their next album cycle, as it seems they’ve already pushed above and beyond for their current performance - backflips, CO2, flames and all. Twenty One Pilots know how to keep a performance interesting, leaving fans reeling for more.

The album Trench dropped on October 5, 2018, via Fueled by Ramen/Elektra Records.