Up The Irons! IRON MAIDEN Blow the Roof Off of Massachusetts’ Xfinity Center [Photos & Show Review] 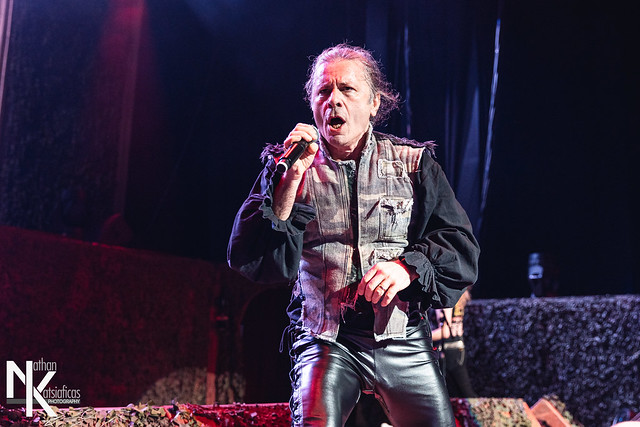 It’s not every day that one of the forefathers of the entire metal genre comes to town, but it was just such a day on August 1st as NWOBHM legends Iron Maiden arrived to melt the faces of those assembled at the Xfinity Center in Mansfield, MA. In what could almost come from a modern Spinal Tap remake, Iron Maiden are currently continuing their “Legacy of the Beast Tour” in support of their mobile video game of the same name. This sounds a bit ridiculous at first, but their crazy stage production is actually a pretty great tie-in to the over-the-top animation of their game, and the setlist that accompanies it all is downright awesome.

The warm afternoon began with heavy metal tailgating revelry in the parking lot. Gates Opened at 6, but most didn’t file in until after opener The Raven Age had begun their set. Musically, the band’s sound lands somewhere between Bullet For My Valentine and Nickelback—take that for what you will. Featuring George Harris, son of founding Iron Maiden member and bassist, Steve Harris, this is the band’s first outing in the USA. It’s not an easy task opening for a group like Iron Maiden—even more onerous, I’d imagine, if your dad is also in Iron Maiden. But, the younger Harris and his cohorts managed to put on a pretty energetic set that got a diverse demographic of fans in the stands and the pit fist pumping and head banging along, and that’s all you can ask for from any opener at a show of this ilk.

Fans continued to trickle in throughout The Raven Age’s set until by the end, much of the venue was jam-packed. After a bit of delay to prepare the stage, the opening notes to UFO’s “Doctor! Doctor!” rang out and the crowd shouted and sang along! As the song closed, the lights dimmed, and the Winston Churchill’s speech from World War 2 began to play out amid the sounds of RAF planes shooting. The band began to emerge and from the backline, a Spitfire aircraft rose up above the stage as they kicked into the anthemic “Aces High.” Clad in an aviators hat and flack jacket, frontman Bruce Dickinson scurried out from side stage and raced to the front to belt out the first lines of the song. This was one hell of a way to start a performance, but the show would only get even better as the night went on.

New to The Raven Age? Check out their video for then single “Angel In Disgrace” here:


The set continued with ever-changing staging and stage props, complimented by Dickinson’s multiple wardrobe changes, and would see a giant Trooper Eddie with a sword, a giant demon’s head, flame throwers, and more that I don’t want to spoil for those who haven’t watched videos from last year’s leg! All of this was a hit with the crowd, which featured a lot of moms and dads with kids in tow—talk about some awesome memories for those kiddos!

This tour has it pretty stacked song-wise, seeing Maiden play a ton of material off of Piece of Mind (basically half the album) and The Number of the Beast, and surprisingly, tracks that from the Blaze Bayley (former vocalist) era of Iron Maiden from The X Factor and Virtual XI—most notably the 11-minute epic, “Sign of the Cross.” One of the coolest moments though, was FINALLY getting to hear “Hallowed Be Thy Name,” which has been off of their setlist for several years now due to a lawsuit that was ultimately settled in 2018. The night ended with mega hit and staple of every Maiden setlist, “Run to the Hills,” after which many of us literally ran to our cars to try to beat the traffic getting out of the venue parking lot. All in all, it was a fantastic night of heavy metal, that was well worth grabbing tickets to see a second night of at the next stop!

If you haven’t seen the “Legacy of the Beast Tour” yet, fear not! It continues through North America into late September—plenty of time for you to catch one or more dates! Check out the remaining stops on the tour below!

Iron Maiden seem to always be travelling at the “Speed Of Light:”

The album The Book of Souls dropped on September 4, 2015, via Sanctuary Copyrights/BMG (US):