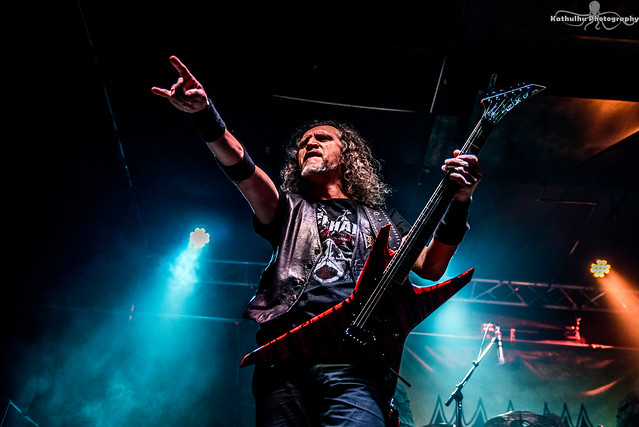 It’s been three years since iconic Polish death metal band, Vader has toured North America and they are back with a vengeance. They made a stop at Club Red in Mesa Arizona, on February 5th and brought with them worthwhile support from Abysmal Dawn, Hideous Divinity, and Vitriol.

Vitriol started the evening off with their ferocious brand of technical death metal. Hailing from Portland, Oregon, they bring with them an unrelenting power that is truly a sight to behold. The precision of their playing is compounded by the dissonant texture of their music to create an aural experience that is unlike any other. They stormed the stage with their energy, and the audience responded in kind.

Hideous Divinity, a brutal tech-death band from Rome, Italy, graced the stage next. I must admit, I had never listened to them before this show, but they’ll be in my regular rotation now. They’re intense, with precise riffs and blast beats. Their brutality is face-melting.

Los Angeles’ Abysmal Dawn were next to grace the stage. After a six-year hiatus, the death metal aggressors are finally releasing a new album. Phylogenesis will be released on April 17th via Season of Mist. They performed a couple of tracks from the upcoming record, and, true to their form, the songs were loaded with immense energy.

Vader has been around since the ‘80s and they show no signs of slowing with age. Guitarist/vocalist Piotr Wiwczarek is the only original member and he has retained a captivating on-stage presence. The band reached back far into their catalogue and played a set that spanned their career from the beginning to the present. Their sound is timeless and every song was perfectly executed. Their latest EP, Thy Messenger, was released last May and they are working on a new LP to be released later this year through Nuclear Blast.


There are still plenty of dates left if you want to catch this tour. After how well this evening at Club Red proceeded, we strongly urge you to do so.

Vader’s most recent recording was the Thy Messenger EP, released May 31st, 2019, via Nuclear Blast Records.