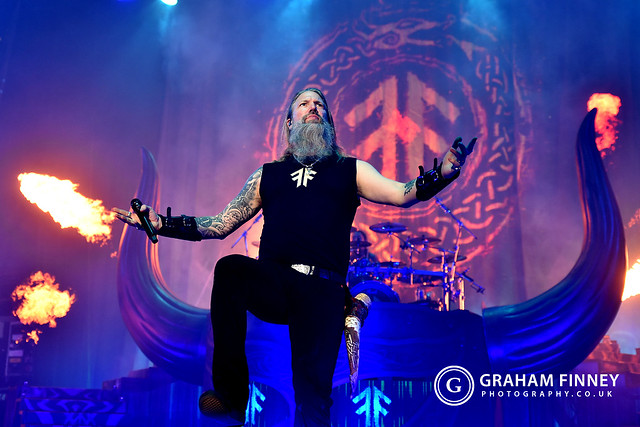 What better way to spend a Friday evening in Manchester than in the company of Swedish Viking metal legends Amon Amarth? Well, as we arrive at the O2 Apollo in Manchester, we find that a few thousand more metalheads have had the same idea with the foyer area absolutely swarming with fans buzzing for a night filled with whatever ale they can get their hands on all to a soundtrack of raucous Viking metal.

Sadly, by the time we get inside the cauldron of a room, fellow Swedes Hypocrisy have been and gone so it’s up to Swedish melodic death metal heavyweights Arch Enemy to really set the bar for the headliners, and they do so in glorious fashion. In no mood for pleasantries, the Swedes hit the stage with a ferocious rendition of “The World Is Ours” before plundering their impressive back-catalogue shaking the Apollo to its core with a thunderous version of “My Apocolypse” and a devastating “War Eternal.” Watching vocalist Alissa White-Gluz stride confidently about the stage while her band grind out their music, it’s clear that not only are their few bands who can match the band in the live environment, but that the headliners are really going to have to bring their A-game tonight.

Here’s one of the reasons tonight’s headliners had to bring their A-Game:


Then again, the headliners are Amon Amarth a band who epitomise everything good and ridiculous about heavy metal. Promised a “big production” ahead of the show, having already witnessed the band live, it would be fair that myself, amongst the thousands here, would be disappointed with anything less than ninety-odd minutes of full-throttle heavy metal... and, thankfully, Johann Hegg and his band of warriors didn’t disappoint. Out of the fourteen songs, nine had pyro comprising of eyebrow singing flames while the rest of the stage was filled up with a massive viking head.

Of course, this was pure cheese from start to finish with onstage battles and inflatable creatures taking you back to an era when Iron Maiden were at their most OTT. Metal through and through, the music is equally as dramatic as the band plunder their vaults unleashing tracks like “Death In Fire,” “Deceiver Of The Gods” and “Guardians Of Asgaard.” Of course, to the outsider, the whole spectacle was completely ridiculous but, to the discerning heavy metal fan, this was the genre at it's finest so, as the band thundered through “The Way of the Vikings,” there was nothing to do but “Raise Your Horns” and raise a toast to this band of Swedish Viking legends as they headed off into the night leaving another city in ruins.

Epitomizing everything great about heavy metal, time to “Raise Your Horns” to the mighty Amon Amarth:


Amon Amarth released their Berserker album on May 9, 2019.