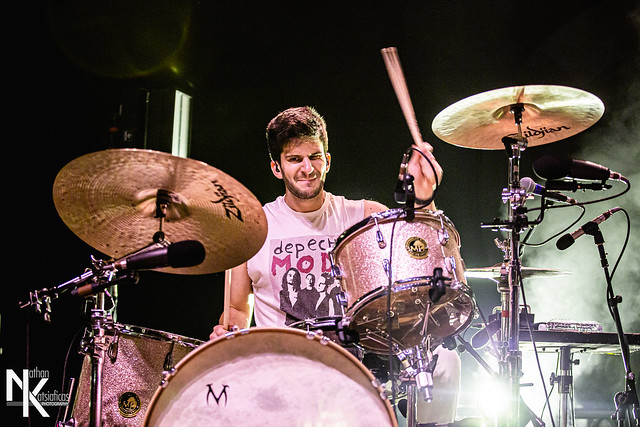 X Ambassadors are in the final stretch of their month and a half-long run with supporting acts Bear Hands and Vérité in support of their June release Orion. We caught up with the tour as it hit Portland, Maine’s historic State Theatre on November 1st.

The concert began with an absolutely phenomenal performance from indie-pop artist Vérité—a.k.a. Kelsey Regina Byrne—kicking things off with the title track off of her latest release, New Skin. Her passion fed the growing crowd. She continued her set with “Good For It”—a personal favorite of mine—as well as, “Ocean,” “"Youth,” “Phase Me Out,” and “Think of Me,” all the while effortlessly dancing around the stage and engaging the audience without missing a single note. Byrne then performed what is arguably her most popular song, “Need Nothing” and the crowd went nuts. Her ability to own the stage and draw people in was apparent from the first note, I look forward to seeing her return higher up on a touring package!

Next up was Brooklyn-based act Bear Hands. Their sound is a perfect middle ground between the indie/electropop vibes of Vérité, and X Ambassadors’ indie/alt-rock sound. The band led things off one of their biggest tracks, “Back Seat Driver,” which got the whole crowd moving. This was quickly followed by “Bone Digger” and “What a Drag.” Bear Hands frontman Dylan Rau has truly mastered the art of pumping up a crowd. His perpetual vibrant attitude and upbeat disposition seemed to grow stronger as their set wore on. Their performance included songs from every one of their four records, giving something for every era of fan. They closed with a few more hits, including “Blame,” “I Won’t Pay,” and of course fan-favorite, “Giants.”

Check out Bear Hands’ video for the single “Back Seat Driver” here:


At last, it was time for X Ambassadors! The band kicked off their set with the single “HEY CHILD,” off of their latest album. What would ensue was nothing short of spectacular, from the music to the light show that accompanied the band, their set was exciting to behold! Their performance continued with “Jungle” from 2015’s VHS, which became a massive sing-along with the much of the crowd swept up by the exuberant stage presence of frontman Sam Harris. Harris, running laps around the stage, frequently jumping, and fist-pumping towards to the crowd sure knew how to keep the audience engaged!

Their performance would continue with newer tracks, “BOOM,” “QUICKSAND,” “CONFIDENCE,” and “RULE,” however they slipped plenty of older numbers in between for longtime fans. The unique sound X Ambassadors has been able to harness is due in no small part by Harris’ incredible saxophone features and solos, which were on full display this night.

At one point, Harris addressed the crowd stating, “Never has there been one singular American identity—(the) American dream doesn’t just belong to one group of people. It’s a collective dream—I CALL BULLSHIT that this dream is not for everyone!” As he continued, he became more heated shouting, “The American dream is a dream, we can’t control our dreams so we have no ownership over them. So the American dream isn’t theirs, it’s ours!” This was a clear response to today’s political climate and the perfect lead-in for their next song, “American Oxygen.”

Does this song make you feel “Unsteady”?


They closed the set with their three most popular tracks, starting with, “Gorgeous.” The next song was “Unsteady,” which is has risen to such popularity because most people can relate to the lyrics—a friend that I ran into went to this concert just to hear this one song. X Ambassadors closed their set with mega-hit, “Renegades.” The “Orion Tour” is currently wrapping up with on the West Coast, check out the remaining dates below!