Band Links:
Now in its tenth year, the Heavy Montréal festival took place on July 27th and 28th at Parc Jean Drapeau in Montreal, QC. With the renovations on the islands completed, the festival was held on the now permanent installation at Espace 67 of Parc Jean-Drapeau. Presented by Black Label, over 50 bands played four stages throughout the day. There was something for everyone, including some energetic sets from genre metal bands stemming back over 40 years.

Devin Townsend, Quiet Riot, Hatebreed, Killswitch Engage, Steel Panther, Godsmack, Evanescence, Watain, Ghost, Dirty Honey, Skálmöld, Atreyu, Fu Manchu, Corrosion Of Conformity, In This Moment, 3Teeth, Clutch, Slash and Slayer were amongst the weekend’s terrific lineup. This extravaganza of diverse artists and bands was spread out over both afternoons and evenings across three stages. More than 30,000 festival-goers attended the two-day event that went from 1:00 pm through to about 10:30 pm both days.

On Sunday afternoon at around 4:45 pm, the members of Anthrax were inducted into the Heavy Metal Hall of Fame in the Heavy Montréal press tent. Anthrax’s almost 40-year contributions towards the genre of metal simply cannot be denied. It was super cool to watch everyone swell towards the branded interview container as the members of the Anthrax strolled up and accepted their celebratory statues.

We came, we saw, we head-banged, we noshed. In celebration of ten years of Heavy Montréal, here are ten things we learned at this year’s edition of the festival...

01. Slayer Reigns Supreme
- How do you articulate the massive hole there will be in the metal community at the end of this year when Slayer wrap up their legendary career? With this performance marking the final Slayer performance in Quebec, fans turned out in droves for one last mosh as the legacy thrash group tore through some of their finest material one final (Canadian) time. The amount of pyro blasted off as the four members of Slayer laid waste to the Montreal crowd was truly epic. A truly ultimate ending to this tenth edition of Heavy Montréal.

02. Heavy Metal Rules!
- So says the members of Steel Panther. Currently hyping up their new album (aptly entitled Heavy Metal Rules), the band broke out their newest single “All I Wanna Do Is Fuck (Myself Tonight)” live for the very first time at Heavy Montréal. If you strip away all of the sexual innuendo, comedic self-deprecation, and their 1980’s cock-rock outfits, Steel Panther is a damn fine foursome of talented musicians. The fact that they have taken their satirical stage performances to the level of popularity they have attained is truly incredible. Their Heavy Montréal performance on the Scène de L'Apocalypse stage late Saturday afternoon was amongst the most entertaining of the weekend.

Check out Mike Bax’s live gallery of Day One at Heavy Montréal 2019: 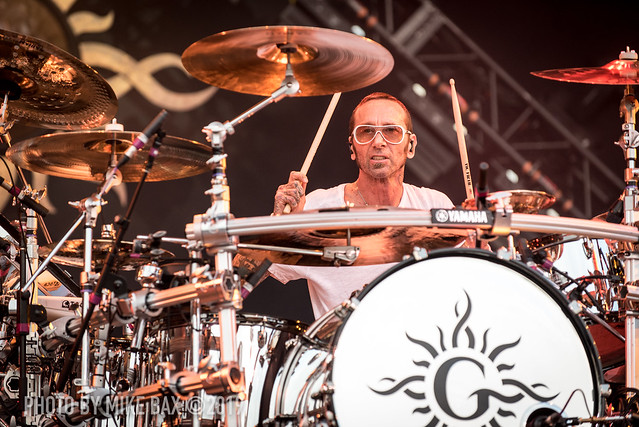 03. Heavy Metal = Kid Friendly!
- The Heavy Montréal festival is a family-friendly event; admission was free for children under ten. The Heavy Montréal Kids Zone was a real taste of metal for fans of all ages with inflatable mosh pits, arts & crafts, splash pad action, bouncy castles and lots of marvellous mini-mayhem. Keeping kids safe has definitely been made a priority so, in addition to free admission for kids under ten, this year also saw the implementation of a new “Child Pairing” system using festival-goers’ RFID (Radio Frequency Identification) bracelets. These bracelets allow families to stay closer together throughout the festival experience. The new system enables parents to digitally tether with their children by pairing their bracelets so that they can always stay connected.

This is a free service, offered by Heavy Montréal to all parents who want to register their children’s bracelets on-site at the designated info kiosk. With the registration process, valuable information can be encoded on the child’s bracelet including name, the emergency contact information of parents, and specific allergies or essential health information, accessible instantly to all security and staff on-site with a basic RFID scanner. It’s an added value that makes everyone feel that much safer and closer to their loved ones!

04. All Hail The Riff!
- Stoner rock; riff rock; doom; sludge. Call it whatever you want, it’s a genre of music with lots of fans. Fu Manchu, Corrosion Of Conformity and Clutch all performing within a few hours of each other on Sunday was indeed a thing to celebrate. Three of the most hallowed bands within their genre in one spot and patrons got to bask in second-hand smoke while banging their heads to the very best material all three groups have recorded. Clutch closed out their set with “Electric Worry” on Sunday, definitely one of the highlight moments of the weekend.

Here’s a quick official recap video of Day One at Heavy Montréal 2019:


05. Satisfaction Could Be Found on All Four Stages
- Two of the best performances we caught over the weekend were on the more intimate Scène du Jardin stage. L.A. bands Dirty Honey and 3Teeth both dropped amazing sets on Sunday. Dirty Honey’s straight-up rock n’ roll approach easily won over patrons who strolled past the stage as the band was performing. 3Teeth’s modern take on industrial music drew in enough curious patrons it became a challenge to push through the crowd to either the Scène de La Forêt stage or back towards the main stages. Both of these bands topped my list of the best sets of the weekend.

06. Improved Espace 67 Grounds and Gold Level Experiences
- The newly finished updates to the Parc Jean-Drapeau festival space proved to be well-thought-out indeed. The green space leading up to the trees has been bisected with paved pathways, leading to the very back of Espace 67. The grounds have also been updated with a metal barrier that keeps the audio experience more localized to the main stages. Special sand has been poured everywhere that prevents the accumulation of traditional mud. Many towering light fixtures are scattered throughout the grounds, enhancing safety as patrons move about the festival. These fixtures add to the visual experience of the headlining bands as they were utilized to form a grid of light-beams that gave the appearance of being caged in light.

This year, fans looking to kick-up their Heavy Montréal experience could opt to purchase a GOLD pass offering fast-lane entry onto the festival site along with access to the Casino de Montréal GOLD Terrace. The GOLD Terrace is an L-shaped, 2000 capacity, elevated platform with a premium view of the main stages, offering exclusive concessions, exclusive bars, and private premium washrooms. During Fever 333’s performance, their guitarist ended the bands set by running towards the back of the festival grounds and giving an up-close-and-personal performance in the back of the Casino de Montréal Gold Terrace. 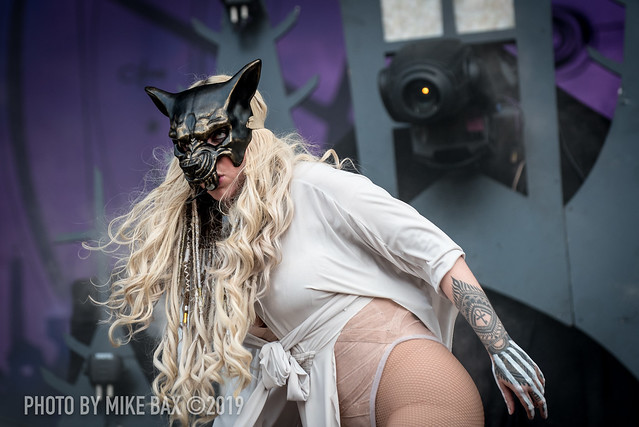 07. In This Moment Have Upped Their Game
- Gone are the days of lead singer Maria Brink standing centre stage in a frilly dress and heels as the band performs. In This Moment is now a pure visual spectacle, complete with stage props, wardrobe changes, and choreography, unlike anything the metal world has ever seen before. Brink and two accompanying dancers in cat masks crept about the stage and pawed at bassist Travis Johnson and rhythm guitarist Randy Weitzel as they looked into the audience. Brink performs with a head-set microphone allowing her to dance and mime atop the stage throughout the band’s performance. Every song featured something new and exciting to look at, keeping fans enraptured for their entire set. Impressive.

08. Eat It Up!
- This year’s edition saw the return of the YUL EAT Gardens. The Gardens featured four iconic Montréal restaurants: Agrikol, Street Monkeys, Foodchain and Grumman ‘78, each featuring unique décor and a large terrace, cooking signature dishes from their regular menu to the delight of hungry attendees. Lots of tasty craft beers were also on tap to fans who braved the heat lubricated enough to raise their fists under the sweltering sunny Montréal skies.

09. VIP at Heavy Montréal Equals an Unparalleled Deluxe Experience
- For fans willing to spend the extra money for a VIP experience over the weekend, they got treated like kings and queens for the weekend. A separate garden oasis behind and off to the left of the main stage offered a separate place to purchase food and drinks. VIP patrons also have access to private air-conditioned bathrooms, lounge on bean bags, hammocks, and cushioned patio furniture. A VIP after-party DJ-set both nights after the headliners were finished performed kept the party going until the wee hours of the morning. Locketgo provided private lockers with phone charging stations and ample space to jam a backpack away for the day. Locketgo offers an innovate locker system with an easy-to-use reservation system that was so simple to sign-up for and use.

10. Ghost Has Genuinely Achieved Greatness
- Ghost have very quickly transcended their way from unique bar-band to a headlining powerhouse. In the past five to six years, the band’s mystique and music have won over fans like Dave Grohl and Metallica. That support has helped to bolster Ghost very quickly towards a Grammy win in 2016 for Best Metal Performance. What fans saw on the Scène Heavy stage Saturday night was an audio-visual spectacle of an unparalleled nature. Cardinal Copia and his band of nameless ghouls led the Montréal crowd through ninety minutes of the best material from all four of Ghost’s commercial releases.

And here’s what you either saw, or missed, on Day Two of Heavy Montréal 2019:


- This tenth edition of Heavy Montréal illustrated once again that a festival curated around heavy music is both sustainable and popular. While Heavy Montréal might not draw the crowds that the Osheaga and ÎleSoniq Festivals tend to, it continues to pull enough fans from around the world to justify its existence. Given that metal is a sub-genre of music with way less radio support, the fact Heavy Montréal has made it through a decade is genuinely something to celebrate. It offers a European festival experience without having to fly to Europe. Every year, the lineup offers a wide selection of international acts, many performing the festival as their first North American shows. This year, Beast in Black and Skálmöld both played for the first time in North America, and both bands were greeted with massive crowds curious to see them live.