Band Links:
It’s a cold night in Nijmegen, but the freezing temperatures are no match for the frigid, icy metal on offer tonight at Doornroosje: following a much-publicized battle with addiction, headlining artist Abbath heads a varied lineup of black-‘n-roll, true Norwegian black metal, blackened death and thrash. And it’s not just the bands that are a wide-ranging variety of sounds, the crowd in attendance is also a mixed bag. Young, fresh-faced metal recruits barely old enough to shave rub shoulders with grizzled and greying veterans in a venue packed to the gills this Saturday night.

Starting things off with high-energy thrash, Chile’s Nuclear channel the best of Kreator or Municipal Waste. Their vibrancy may seem at odds with the rest of the lineup, but serves well to set the mood for what is to come. Despite their rough-and-ready, nearly primitive approach, they do raise expectations with a set that covers most of their almost two decades-long career, making minor fluffs easily forgivable.


This is followed by one of the more awkward soundchecks I’ve experienced: Vltimas, the globe-spanning blackened death ‘supergroup’ formed by Aura Noir’s Rune Eriksen and Morbid Angel’s legendary frontman David Vincent struggle to get things right, making it nearly an hour’s wait for them to take the stage. Musically, there isn’t much to find fault with here, but it does feel as if the arrangements are purpose-built to showcase Vincent’s surprisingly expressive vocal range. This is no bad thing – new cuts like “Monolilith” and “Something Wicked Marches In” flirt with black metal riffing and death metal blasting underscoring a blend of clean vocals, chants, growls and shrieks. In fact, all that mars the experience is Vincent’s on-stage presence: his brash swagger may be born of extensive performing experience, but its seething heterosexuality translates oddly in a male-dominated audience.

1349 take the stage next, and any lingering cobwebs are summarily blasted from existence. Between Frost’s percussive onslaught and Archaon’s ferocious riffing, there can be no doubt in anyone’s mind that True Norwegian Black Metal is as vital now as it was in the early ‘90s. Hard hitters from the latest album, The Infernal Pathway (reviewed here: https://puregrainaudio.com/reviews/1349-the-infernal-pathway-album-review), stand strong against perennials like “Atomic Chapel” (off 2010’s Demonoir). Ravn’s stage presence may not be as well-known as some of his black metal contemporaries, but this performance leaves no doubt as to his passion for the craft, or his capability in driving a crowd. Even the moshpit – something I rarely see at European black metal gigs – is a foaming-mouthed frenzy, even given the truncated, 35-minute setlist. The final takeaway, for me, is one of admiration for Archaon, however – if ever there was an underappreciated guitarist, here he is: fast, technical and still hugely expressive. 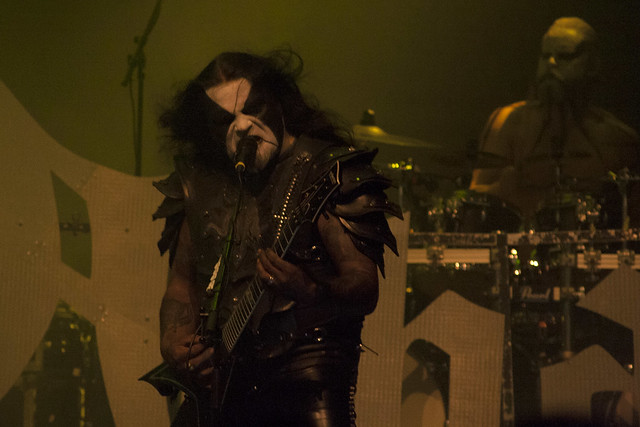 The final word of the evening belongs to the ex-Immortal frontman Abbath, though. Fresh from a rapid detox, he is present, focused and able-bodied for a long (75 minutes!) closing set. And while it does my heart good to see and hear him still doing what he does best, I can’t help but feel a twinge of remorse for the music itself: his 2016 self-titled solo album was a groove-laden, engaging and dynamic affair, but 2019’s Outstrider (see review here) – for which this tour is named – is pretty pedestrian in comparison. The standard black-n-roll formula grows stale, punctuated by Ole Farstad’s accomplished but unnecessary leads. Even Abbath’s presence is muted, whether as a consequence of the music or his recovery process, making the experience a slightly melancholic one. The exaggerated showmanship from 2007’s iconic Seventh Date of Blashyrkh, or even the solo artist from Hellfest 2016 who ignored security to chat to a disabled fan after his show is conspicuously absent.

Nevertheless, these are all minor blips on the radar. Sound issues are par for the course in multi-act gigs; shorter subsequent shows are to be expected; even frontmen being in a more serious, focused headspace is hardly something to take offense at. Doomstar Bookings and Season of Mist are to be commended for putting together this show and the tour – it makes for an enjoyable, powerful and transformative metal experience and one I heartily recommend.

The album Outstrider was released on July 5, 2019.