Band Links:
Aftershock Festival, the massive metal and hard rock festival in Sacramento, California just held its sold-out seventh annual festival. What started as a one day event in 2012 quickly evolved into a two day festival in 2013, and this year marked the first year of Aftershock being a full three day festival. While the bill included plenty of well known artists throughout the three days of metal and hard rock, the main stage boasted some heavy-hitters, including Slipknot, Blink-182, and TOOL.

Aftershock takes place at Discovery Park in Sacramento. There are two large main stages located at the front, right near the main entrance (the Kolas Discovery Stage), and in the centre of the park (the Monster Energy Stage), where most of the well-known headliners play. There is also a smaller stage (the Coors Lite Stage) near the back entrance to the festival. In order to fit in as much music as possible each day, the festival is spread out so that bands performing at the smaller stage can play simultaneously with acts going on at the larger stages without getting drowned out. Around the outer rim of the festival, one can find plenty of food, drink, and merch options.

Beartooth, a metalcore band from Columbus, Ohio, was one of the first acts of the day and despite the heat, they were able to keep their crowd moving. Caleb Shomo, Beartooth’s frontman, was very gracious to the crowd and to their fans. Problems in the pit caught Shomo’s attention and he quickly directed medics to the injured individual, stopping his set to ensure the person got out safely. Beartooth was a prime example of how the metal community looks out for each other. This was Beartooth’s third time being at Aftershock and it certainly won’t be their last.

Check out Catherine Patchell’s shots of Day 1 on October 11th: 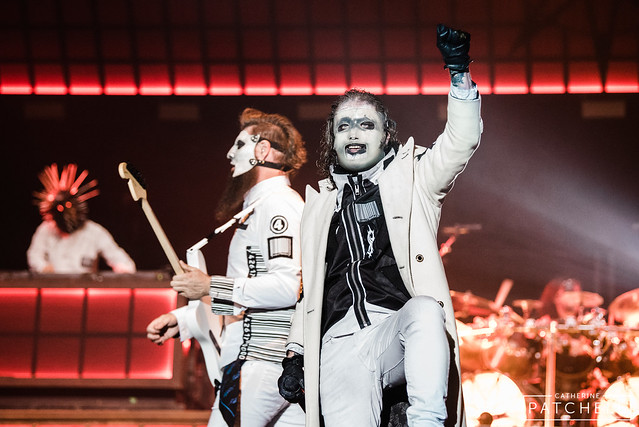 It was not smooth sailing for the start of every set this weekend. Poppy was unable to make it to the festival grounds in time and The Crystal Method started almost ten minutes late. I Prevail was almost on that list too, but was able to arrive in time. Due to the dry weather, the Los Angeles area was fighting a forest fire that caused a traffic jam for a lot of travelers. I Prevail was unable to drive up to Sacramento as they planned, but thankfully was able to hop on a flight and had no problems launching into the start of their set on time and delivered a fiery set. Fan favourites “Come and Get It” and “Gasoline” were greeted with lots of excitement from the crowd alongside newer singles such as “Scars” and “Bow Down” off of their 2019 album.

Knocked Loose played on the Coors Lite stage, but that didn’t restrict them from keeping the crowd hyped the entire set. The Kentucky hardcore punk band was able to open up three separate mosh pits and keep the crowd on their feet. The Coors Lite stage almost had to be renamed the Coors Heavy stage after Knocked Loose delivered the first truly heavy set of the day. Their set included five songs off of their new album, A Different Shade of Blue, while also including top tracks “All My Friends” and “Deadringer.”

Get more acquainted with Beartooth with “Afterall” from their latest album Disease:


The best way to celebrate a birthday is at Aftershock. Just as the sun was beginning to set on the first day of the festival, Halestorm was geared up to take to the Discovery stage. To celebrate the birthday that Lzzy Halte had just the day before, a team member came out to surprise her with a cake. The crowd was quick to jump into singing “Happy Birthday” to her altogether, putting a large, genuine smile on her face.

Vocalist Randy Blythe exclaimed that Lamb of God had, “returned for one thing and one thing only, to fuck shit up.” And do that they did. From a distance, it appeared that there were at least five individual mosh pits going during “11th Hour.” Lamb of God set the record for the number of consecutive mosh pits in a song. Part of the way through “Walk With Me in Hell,” Blythe stopped the song to make sure that someone in the crowd was not hurt, as it had appeared that there was a signal that something had gone wrong, but thankfully everyone was ok. Later on, in the show, Blythe also gave a shout out to the Deftones since the band was playing in their hometown.

Check out Catherine Patchell’s shots of Day 2 on October 12th: 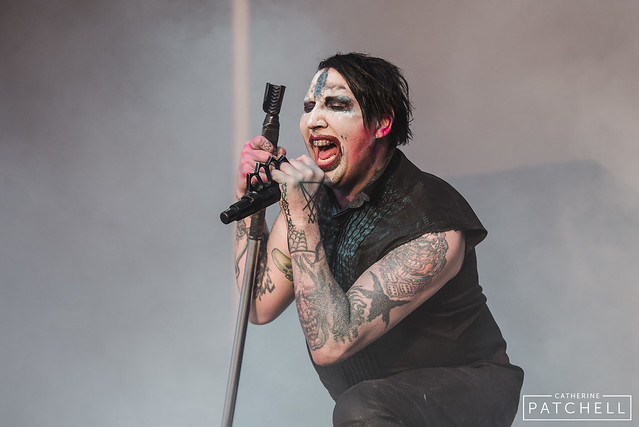 The heavy metal band based out of Des Moines, Iowa closed out the first day of Aftershock 2019. This was Slipknot’s second time at the festival, the first time being in 2015. The originally nine-piece band just wrapped up their “We Are Not Your Kind” U.S tour but their stage set up and setlist at Aftershock mirrored the energy that they brought on that tour. There was a good blend of songs from their older albums, fan favourites, and some new tracks. The crowd never ceased to mosh and headbang during the entire set. Corey Taylor, the band’s frontman, was very gracious to the fans that have kept this band alive for 20 years since their self titled album’s release in 1999. Slipknot was the ideal band to end day one and left the crowd excited for what the rest of the festival had in store.

Overall, day one started the seventh Aftershock off strong! There was so much energy and aggression, but also a sense of community. The fact that two different bands stopped their sets to tend to the needs of the crowd shows the misconceptions that come with metal music, that its violent and dangerous, when in fact this is a community of people who care for each other and share bonds through music. That sense of community was definitely felt in days two and three as well.

Feel the mightiness of Lamb of God with none other than Chino Moreno of the Deftones in the music video “Embers:”


As the second day started the crowd seemed slightly sluggish after the powerhouse of the first day. The fatigue and the hangovers from Metallica and Slipknot exclusive alcohol were likely getting the best of them. But still, Saturday of Aftershock 2019 promised even more big-names. Friday featured a steady stream of metalcore and heavy metal, whereas Saturday was a bit more diverse. There was hard rock from Stone Temple Pilots, industrial/heavy metal from Marilyn Manson and Rob Zombie, a mash of metal and rock from Bring Me The Horizon and pop-punk from Blink-182. The crowd was much more diverse than day one because of this widespread of genres within the metal community.

While Bring Me The Horizon has continued to explore new musical sounds with the release of their recent album at the beginning of the year, their live performance has continued to change alongside it. Uncommon for the genre, Bring Me The Horizon even included four dancers throughout the set. The setlist included songs from their full discography starting with 2013’s release of Sempiternal, leaving out some heavier favourites from the first half of their career.

Check out Catherine Patchell’s shots of Day 3 on October 13th: 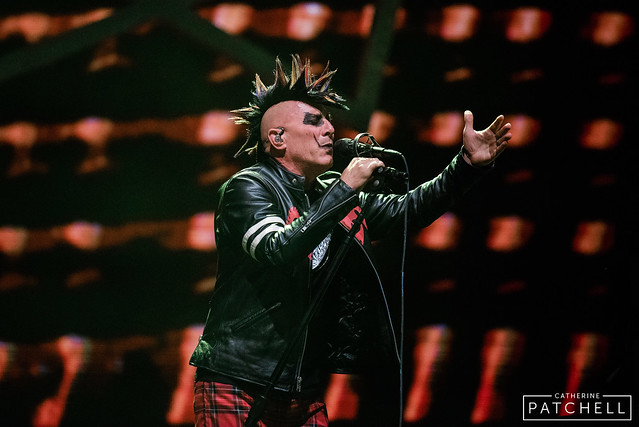 Rob Zombie brought his classic rock charm to the second day of Aftershock, including his grunge cowboy costume and horror movie shock value. He also reminded the crowd that times have changed, and the concert culture has changed with the emergence of cell phones. He asked us to, “Put your damn phones away for three whole minutes” and appreciate the music. For the most part, the whole crowd complied.

French technical death metal band Gojira made sure we didn’t grow stagnant after three days of metal. They were one of the heaviest of the weekend, and the crowd could feel it. They brought it hard as soon as they started playing, opening up numerous mosh pits.

Korn was the supporting headliner that night, on the Kolas Discovery Stage, and would be followed by TOOL over on the Monster Energy Stage. This forced people to make a choice: arrive early for TOOL to secure a good spot for the headliner, or watch Korn’s amazing performance. The choice was a hard one, and the sold-out venue seemed to be split. Korn received an overwhelming crowd for their third Aftershock performance. Coming off of the release of their new record The Nothing last month, there was as much anticipation to hear their new album live like several other bands from this weekend. As always, Korn delivered an amazing set and helped to end this weekend on a strong note.

“Get High” with some Zombie with the music video for “In the Age of the Consecrated Vampire We All Get High:”


The final band of Aftershock 2019 was the one and only TOOL and this show only marked the beginning of their “Fear Inoculum Tour.” The band displayed their psychedelic light show and the spotlights fell on band members, Adam Jones, Danny Carey, and Justin Chancellor, while lead singer Maynard James Keenan lurked in the back of the stage in the shadows. He spoke very little to the crowd, only a brief greeting of, “What up Sac?” and a departing, “Thank you and goodnight,” two songs away from the end of the ten-song set. TOOL had the perfect balance of songs from all stages of their musical career. The set even included songs from their earliest release, Opiate. There were also several songs from Aenima, 10,000 days, and a song from Lateralus. And of course, after the much-anticipated release, the band played several songs from Fear Inoculum satisfying their fans need to hear something new since their last album’s release thirteen years prior.

In other news, on October 10th, before Aftershock 2019 even started, it was announced that the heavy metal legends, Metallica will be double headlining Aftershock 2020, as well as the four other Danny Wimmer Festivals throughout the United States. Because of this announcement, 2020 weekend passes are already on sale and selling quick! Aftershock 2020 will take place October 9th-11th at Discovery Park in Sacramento, California. Details can be found now at the Aftershock official website. The other headliners and bands are yet to be announced, but it's already shaping up to be a legendary edition of Aftershock!