Band Links:
Cafe Bourbon Street in Columbus is an unassuming place with no windows, located next to what appears to be an abandoned nightclub. One step inside the door, though, and you’re transported to DIY show heaven. There’s a Ms. Pac Man arcade game, festive lights and decorations all over, and a window, behind which are some people whipping up delicious gourmet pierogies (it’s Pierogi Mountain!). The door person is kept busy all night determining who’s there for the show and who’s just there to pick up pierogies.

On the stage, Columbus’ own Trying were doing a soundcheck that included Joy Division’s “Love Will Tear Us Apart” with a clarinet instead of a synth, played by Laura Lenhart. This immediately caught my attention because it worked so well. Their set didn’t end up including the cover, but it doesn’t matter because the set was delightful, joyful indie-pop that was as fun to watch as it was to hear. It included the appropriate amount of songs about dogs, which is two, as well as their newest singles, “I Just Can’t Feel the Rhythm” and “That is Not Your Dirt.”

It’s important to note that this band not only includes a clarinet, which gives us a fantastic noise jazz break-in, “I Just Can’t Feel The Rhythm” but also a glockenspiel!

“That Is Not Your Dirt” is off of Trying’s new album I Just Can’t Feel The Rhythm:

The next band up was Ann Arbor, Michigan’s Parkway & Columbia. Continuing the theme of “instruments you don’t typically see at DIY shows,” this band featured a vibraphone, masterfully played by Nick LaForge. Their melodic indie sound was the perfect follow-up to Trying.

Tyler Floyd, on lead vocals and guitar, explained some of the personal background to his songs, like “Perpetual Sweater,” a song about playing in a church band while struggling with, and letting go of, his faith. It’s a beautiful song that transcends Tyler’s personal experience and applies to anyone putting up a front for the sake of others, afraid of exposing their true selves.

Check out the small gallery of live shots thanks to Elliott Saxophone: 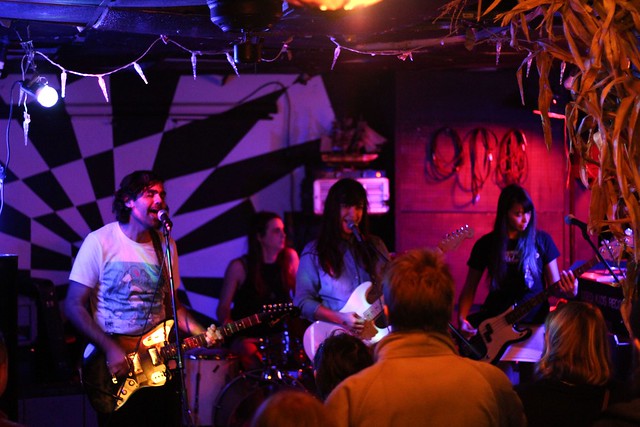 The next band, Manners Manners, came all the way from Baltimore, Maryland, and opened with their power-pop rocker “Monument,” a song written about Baltimore city finally taking down its Civil War Confederate monuments with a perfect balance of Jack Pinder’s warm, rich voice echoed by Haley Sweet’s backing vocals (which are sung at the same time she’s expertly holding down the rhythm with bassist Jes Welter).

They graced us with their newest song, “De-Accession Now,” influenced by Teenage Fanclub and Superdrag, a song Pinder wrote about “giving my former self credit for the things he was good at…. I’m returning his dignity and self-worth to him,” as well as a pristine cover of Guided by Voices’ “Game of Pricks” and my personal favorite, “Cotton” from their First in Line EP, released almost exactly one year ago.

Finishing off the night was Columbus’ own didi, self-described as “noisy pop” and featuring incredibly beautiful harmonies with some serious Kim and Kelley Deal (of the Breeders) vibes from Leslie and Meg, especially on “Haru.”

The fact that the crowd stuck around to hear didi’s full set, even though it was late on a Sunday night, speaks to the sheer power of the band. Their songs are both personal and political, noisy and melodic, rough around the edges but smooth in the middle. Their newest album, Like Memory Foam, came out in November 2018 and is worth a listen from beginning to end.