Band Links:
Three things struck me about this Enthroned, Schammasch and Caronte show at P60 Pop Podium in Amstelveen, Netherlands on January 5th more than any other I have recently attended. The first was the venue; P60 in Amstelveen is not only a lovely size for a metal gig, somewhere between roomy and intimate, but it’s also got a really great sound setup. In addition, this being my first European club gig means the lack of cigarette smoke saturating my every pore (a given at any South African club event, legislation be damned) was an extremely welcome surprise. Sadly, the venue wasn’t particularly full, perhaps the fact that the show was on the last Sunday of most people’s winter holidays being the contributing factor, or that the bands had played at the Hedon Zwaar Niuewjaar mini-festival in Zwolle the night prior.

The second thing that really hit home was the diversity of the crowd in attendance. While the majority of the attendees squarely fit into the extreme metal stereotype, more than a few hipsters, punks, stoners, and blue denim-clad doomers filled out the ranks, a mélange of subcultures peacefully cohabiting in a way that I haven’t experienced since the mid-‘90s club days of Johannesburg, when punks, skinheads and goths could regularly be seen on dancefloors grooving together to The Cramps’ “Human Fly.”

Third, and most importantly, was the selection of music on exhibition. And exhibition is a carefully selected word in this case, because the stylistic juxtapositions of this leg of the tour really speak of thoughtful, considered curation. A clear and engaging narrative can be easily and readily inferred by the progression through the bands’ styles and themes, as well as their presentations thereof.

Check out the video for “Aghoria,” just released off of Cold Black Suns prior to Christmas:


Kicking things off, Italian outfit Caronte’s take on doom metal pulls from late-‘80s gothic rock to contemporary stoner doom, all neatly alloyed with a hefty dose of Thelemic esotericism. High-end melodies overlaid on meaty, reverb-rich basslines along with a surprising vocal range somehow recall The Mission and Rosetta Stone at the same time as Orange Goblin and Prong, making for a diverse and engaging live act.

The aforementioned esoteric component neatly segued into the ritualistic and structured performance by Schammasch, a band that have, since I discovered them on their incredible 2014 album Contradiction, defied straightforward classification. Their latest record, Hearts Of No Light, is no exception to this: as conceptual as the finest progressive metal, possessed of as much darkness as the most underground black and as hard-hitting as the harshest brutality death can offer, yet at times so heart-breakingly clear and fragile you scarcely dare to breathe. And their live renditions do this description justice. Dual vocal harmonies, primitive rhythms invoking hypnotic effects and seven-string guitars being stretched to the absolute limits of their range are sharply contrasted with passages of anguished screaming, guitar tone like a rusty hacksaw and bullet-to-the-head drumlines.

The visual equivalent of a Schammasch show, for me, is the scene towards the end of 2018’s Hereditary, where Toni Collette’s levitating character decapitates itself with piano wire, starkly unsettling, typified by a disturbing shadow/light interplay and yet, still strangely intriguing and infinitely memorable. And don’t even get me started on the gorgeous lavish fabrics employed in the bands’ stage robes. 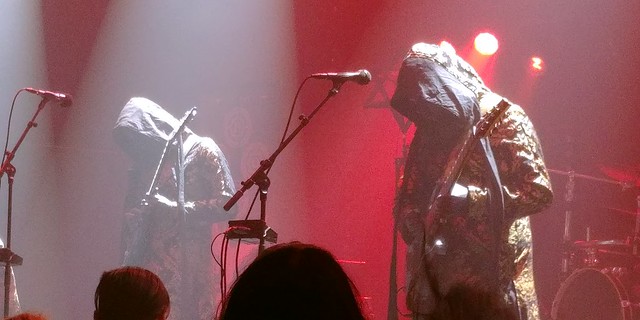 As if that emotional rollercoaster was not enough, Belgian black metal institution Enthroned finish the night in grand style. While their performance is not as nuanced, or as theatrical, as that of Schammasch, it still leaves its mark. The heavier assault of their percussion, in particular, makes for a no-nonsense finale, taking the darkest mysticism invoked in Caronte’s show and tempering it with elements of Schammasch’s ritual approach, making for a visceral overall experience. Older favourites stand the test of time alongside new cuts from the 2018 Cold Black Suns album (check out our review), with the modern styling of “Vapula Omega,” the crowd-pleasing songwriting of “Silent Redemption” and the deeply atmospheric “Aghoria” best benefiting from the live setting.

Having seen the album release show at ThroneFest last June (see our review), I am very pleased to note the flourish and flair Enthroned have added to the performance of these numbers. It may be a practice-based, repetitive, muscle memory thing, it may be the smaller, more intimate venue, but the band seemed tighter and more at ease throughout the performance. All in all, the heavy eyes and aching joints punctuating my commute early on Monday morning were well worth it; all three bands played their (cold black) hearts out, despite the smaller crowd.

Enthroned’s latest record, Cold Black Suns is available from Season of Mist; Schammasch released Hearts Of No Light on Prosthetic Records in November 2019. Wolves of Thelema, the latest album from Caronte, was released on Ván Records in December.