Band Links:
The first of the two 25 year anniversary Vans Warped Tour weekend events was held in Atlantic City, New Jersey (read our coverage of that event here) but California had the treat of hosting the official LAST Warped Tour stop at the Shoreline Amphitheater in Mountain View. Saying goodbye to the summer tradition after 25 years is hard, but Founder Kevin Lyman sent fans out in a phenomenal way.

Last year the queue for getting through security at the Shoreline Amphitheater was atrocious. The screening process went so slowly and the line wrapped so far along the rim of the venue that organizers stopped every stage (some mid-set) and passed along instructions that the event was being put on pause until they could give people more time to enter the venue. That experience took a complete 180-degree turn this year; I sure was impressed. There was no standing in line, but only a moving line snaking through the queue fencing which frequently led people to metal detectors that also had no wait. It was a much-needed improvement in the experience of attending the venue.


Waking up in the morning after the first day of Warped Tour was rough. That after-festival soreness that lingers from standing on concrete and being in the sun all day (ok, maybe that’s from age) made for a slow-going morning of getting out the door for day two. One day of Warped Tour had always been an exhausting experience, how was one to keep this up for two?! With a double-shot coffee and a new layer of sunscreen, I arrived at the venue and quickly realized that everyone had the same level of enthusiasm as day one; no one was slowing down! Seeing that got me out of the slump and revved up for what the day would have in store. Here are some highlights of the weekend.

01. The Elusive After-Warped Karaoke Came to the Main Stage.
- Ever hear stories of what happens behind the scenes at Warped Tour? How about how artists would get together and jam covers? At this last Warped Tour show, that didn’t happen behind the scenes, but for everyone on the main stage. Due to a flight issue, NOFX was running late to arrive in time for their set (which is an entire story in itself) so Kevin Lyman created a variety of supergroups to converge on stage to play NOFX covers. With 25 years of Warped Tour under his belt, you can be sure that Lyman is quick on his feet to come up with a plan when things go awry. 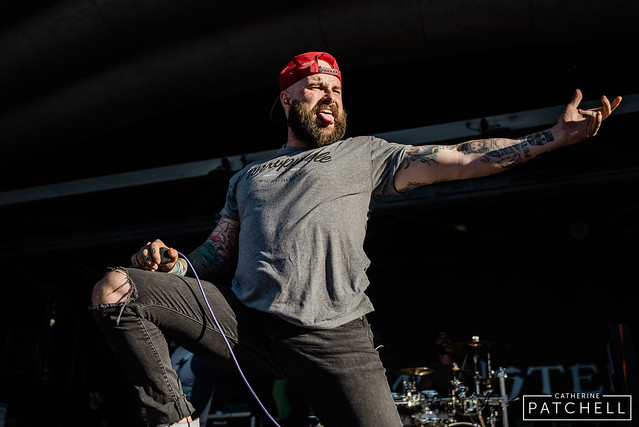 Did you know that Sum 41 started off as a NOFX cover band?

The first supergroup to take the stage consisted of Sum 41 and The Starting Line. Taking the centre stage to sing the “Stickin’ In My Eye,” Kenny Vasoli noted how terrifying it was to come out to play something that was not fully rehearsed. Even if it wasn’t acoustically perfect, the part that stood out was how much fun everyone was having and how special it was to see a variety of musicians together on stage that you would.

Next up, Thrice came out with a cover of “Linoleum.” The highest energy song was a huge mix of artists. John Feldmann of Goldfinger, Anthony Green of Circa Survive, and Porter McKnight and Brandon Saller of Atreyu all took to the stage and were quickly joined by a plethora of other artists for a true karaoke session.

Two audience members came on stage to sing one final NOFX cover. Just as they were nearing the end, the members arrived and jumped onto the stage to dive into the highly-anticipated set.


02. Yungblud Set the Weekend Record for Crowd Surfing Distance.
- Before taking to the stage for an early evening set, Yungblud let fans know through social media that there was a surprise in store during the set. That surprise turned out to be bringing Machine Gun Kelly out to sing “I Think I’m Ok” together not once… but twice?! After performing the song from the stage, the two jumped into the second round of the single as they began to crowd surf all the way to the Monster VIP viewing section. MGK arrived first and Yungblud followed a verse later. While the choice to sing the song twice seemed strange, the crowd did not appear to mind one bit and the fans on the Monster Energy riser were thrilled to have the chance to be up close to the performance.

There were also rumors that Halsey was there to watch the set. If that speculation is true, might that imply that the second playthrough of “I Think I’m Ok” was due to a last-minute change to the setlist that may have intended to end with Halsey coming out to join for a performance of “11 Minutes?” 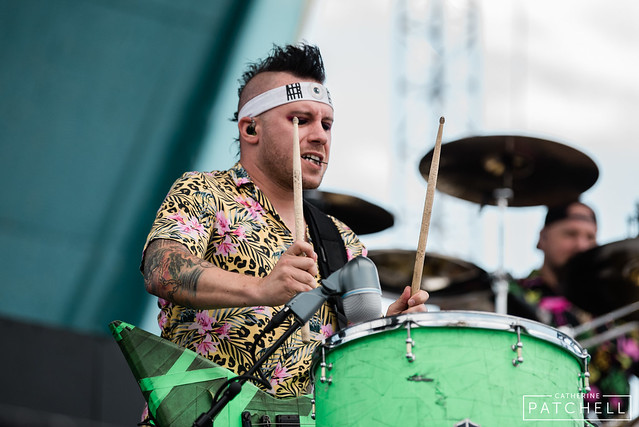 03. Porter in the Pit
- While a number of artists crowd surfed during their sets at Warped Tour, Atreyu’s Porter McKnight took it one step further. As soon as the first notes of “Ex’s and Oh’s” came over the speaker, McKnight was headed off of the stage with his wireless bass in hand and into the crowd. Moments later, he was surrounded by a circle pit. While he’s started frequently doing this during the band’s sets, it’s been at smaller venues, making the distance from the stage to the pit a relatively short path to take. Being up close and personal to the artists of one’s favorite songs just makes the set that much better!

While founder Kevin Lyman is headed on a much-deserved break, how that the break lasts is to be determined. Late in the evening, the crowd roared with agreement that they wanted more Warped Tours, after Lyman’s wife Fran inquired if they should do more of them. With two successful 25th anniversary shows this summer, one can’t help but wonder what other events will begin to pop up under the Warped Tour name.

Head over to the Vans Warped Tour Instagram page to hear stories and memories from across the 25 years of the tour.

This special piece looks at the skate culture which has become synonymous with Warped Tour: