Band Links:
Gold Steps are an Austin, Texas-based pop-punk quintet built around the husband and wife duo of vocalist Liz Mauritz and guitarist Zachry Duarte. The band recently released their snappy, emphatic single, “Empty Space” (stream on Spotify here), alongside a slick music video via Timekeeper Media - which you can check out below.

The group continues to hone and maturate their sound since 2017’s Incandescent (available on Bandcamp), and “Emtpy Space” is a great indicator of their commitment to making their tunes even stronger. We are ecstatic to have Liz join us for this very special guest blog feature wherein she gives fans the inside scoop on some of the Easter Eggs hidden in the “Empty Space” video.

An “Empty Space” of Easter Eggs by Liz Mauritz:
- While planning out our video for “Empty Space,” Gold Steps thought it would be fun to add some personal touches for our fans. Take a look for these Easter Eggs yourself!

The guitar that Zach plays throughout the video is a Reverend Matt West Signature; Matt West plays guitar for Neck Deep. Most people already know that Gold Steps is named after the Neck Deep song of the same name, and Zach and I are huge fans. I even surprised Zach on his last birthday by flying us out to San Diego to catch the last date of Neck Deep’s tour with WSTR and Stand Atlantic, because we missed the Texas dates while we were on our own tour.

The letter I’m holding is a real love note that Zach (guitar) wrote to me a few months into dating. It’s dated 05/13/16, and it’s hung on our fridge ever since. If you look close, you can read the letter in its entirety, which I think perfectly encapsulates the deep love in our relationship. It also reveals our nickname for each other, “Honey Pie,” which we have tattoos to symbolize. Aww!

Fun fact: In the letter, Zach says he can’t wait to get married, but he didn’t propose until over a month later, on 06/25/16. When you know, you know!

This short shot has several of our Easter Eggs. The easiest one to see is the record I’m placing into the box: Joyride by Transit. Most of us in Gold Steps are huge fans of Transit, and Joyride is a record that Zach and I listen to nearly every day. We were sad to hear of Tim Landers’ passing in February, though our video was filmed in mid-January. Our intention was to give our fans a little insight into our current inspirations, while also paying homage to the brilliance of Transit.

Back to the shelf: I’m the kind of person who likes to put as much meaning and thought behind everything, so of course every record is one from my and Zach’s personal collection. The record on the bottom shelf is Brand New Eyes by Paramore, which Alex (guitar) and I consider our favourite Paramore album.

Last in this shot is a real inside joke between us and the band Stand Atlantic. See that little bird sitting on the  shelf? 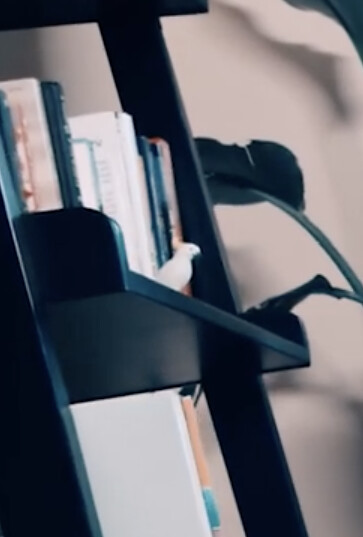 His name is “Yummy Yummy” and he belongs to Brandon Lung, Stand Atlantic’s longtime photographer. Last October, we hooked the band and Brandon up with a place to stay at my parents’ house in Wisconsin. When Zach and I visited my family for the holidays, this little bird was sitting on the dresser in the guest room, and no  one knew where it came from. The only logical explanation was that someone in the Stand Atlantic group had left it, and sure enough! Brandon confirmed it was his. Gold Steps took Yummy Yummy with us to Texas, recording at King Sound in Kentucky, and on tour to the West Coast. Yummy Yummy was finally returned to Brandon when Stand Atlantic stayed at our house in Austin on their last tour.

A Few Other Behind-the-Scenes Facts:
- We found the shooting location on AirBnB. The only thing I cared about was having a front room that was circular or rounded out with tall windows. This house was the only one that fit the bill, and it was perfect!

- The owner of the house is really into Christmas, so we had to hide and take down a bunch of Christmas decorations and put them back in the same spot after shooting.

“Empty Space” is anything but. Get to know the music video now!


- We moved all the antique furniture in the living room ourselves to shoot performance shots in the empty space (symbolism!), and then moved it all back for the narrative shots.

- We set up fans outside the windows to help make the curtains blow in the  breeze. During the up close shots where I’m at the window, Zach actually laid on the floor and helped move the curtain so it was more controlled.

- This is the fourth video we’ve shot with Timekeeper Media, who is now our regular videographer. We’re currently planning the shoot for our next video!

- All of our videos have been styled and conceptualized by me. I love planning everything: storyboarding, props, outfits, extra details like the Easter Eggs in this video, etc. It’s a fun project for me, and something I would love to do for other artists if I had the time.  Thanks for watching, and keep an eye out for our next video coming soon!

Get your fists up, and prepare for a “Suckerpunch.”