Band Links:
It’s the Honda Indy weekend again, and like every year, there is also one of those “must-see” concerts happening nearby at Budweiser Stage, down by the waterfront of Lake Ontario in downtown Toronto. Rock n’ roll icons Heart took the stage, along with almost co-headliner Sheryl Crow and “America’s sweetheart” Elle King. Now, for those that may not be familiar with the venue, accessing Budweiser Stage involves driving on Lakeshore Blvd. Guess where the Indy racetrack is... This was definitely not a day to drive to the show. Taking the train was better, at least until we arrived at the Exhibition, right nearby Budweiser Stage. The race goes through there too.... All roads are closed off, resulting in a huge walking detour. I just trudged along thinking of the musical reward that awaited me at the end of my pilgrimage.

The first band of the night was L.A. rock/soul/blues singer Elle King and the Brethren. Elle King has, in my opinion, one of the most awesome raspy voices in music today (for all you trivia nuts out there, Elle King is also the daughter of actor/comedian Rob Schneider) Appearing as though there were some technical issues with her banjo pick-up early on, King and her band had no problem at all overcoming the difficulties and getting a very multi-generational crowd to their feet and dancing to some favourite hits including my personal choice, her massive hit “Ex’s And Oh’s," during her short but awesome seven-song set. The only song that was missing, which I was disappointed not to hear was “America’s Sweetheart,” the third single off King’s debut, 2015 album, Love Stuff. King is currently promoting her second album Shake The Spirit, released in 2018.

“Shame” was the first single off of King’s 2018 album, Shake The Spirit:


The second of tonight’s all-girl powerhouse lineup was another L.A. artist, Sheryl Crow. What can one say about Sheryl Crow now over 30 years into her career, other than that she sounds fantastic, looks fantastic, and still maintains an amazing voice while maintaining that heart-melting smile. She can make anyone begin to tap their feet, clap their hands and sing along to hit after hit.

As a matter of fact, the majority of the crowd were on their feet throughout Sheryl’s entire set. Crow interacted quite a bit with her fans, slinging her guitar over her back and wandering from one side of the stage to the other waving to fans. She has also mentioned that her next album (a duet compilation) might be her last. If that’s true, we can only hope that she comes back to Toronto from time to time.

Crow’s first three songs were “A Change Would Do You Good,” “All I Wanna Do,” and “Prove You Wrong.”

“Redemption Day” is the first single off of Crow’s eleventh, and final, studio album Threads. The song is a collaboration with the late, great Johnny Cash:


During the stage set up intermission, I noticed Heart had a video guy wandering the front row, asking fans if they’d like to share anything with band leaders Ann and Nancy Wilson. A group of women in the front volunteered, and proceeded to do the Wayne’s World “We’re Not Worthy” bow. Behind them was a group of younger fans screaming “Barracuda” and raising “devil horn” fists. You could clearly see that Ann and Nancy Wilson have the power to unite multiple generations of rock n’ roll fans who have all grown up with and loved all of the Heart classics that have now incredibly spanned over four decades!

When Seattle’s own rock goddesses Heart finally hit the stage, the crowd let out a thunderous roar of approval. Having not performed together for a while, everyone was wondering what the atmosphere on stage would be like. As soon as they started into the first song of a 90-minute set “Rockin’ Heaven Down,” you could “see, feel, and hear” that … yup. It’s the good old Heart that we all know and love alright.

Vocalist Ann sounded absolutely fantastic with her raunchy yet angelic voice that hits you in that spot and makes your rib cage reverberate in joy. Guitarist Nancy looked genuinely happy making her guitar sing and thrashing her long blonde hair about, as only “rocker chick” hair can. She made sure to spend time playing together with the rest of the band's guitarists and giving us camera dudes several great photo ops. The band also made sure to sprinkle in a few cover songs into their set that sounded as good as Heart's own material.

It was a spectacular evening of rock n’ roll that left me with a really warm and happy feeling. The warm part may just have been because it was roughly 30 degrees Celcius out, but I’m pretty sure that the 14,000 fans in attendance will agree that it was simply another magical night of great music. Unfortunately, Heart has decided that none of the concert photos from the evening may be published, so I’m afraid I’m unable to share the great live images that I captured of the band. 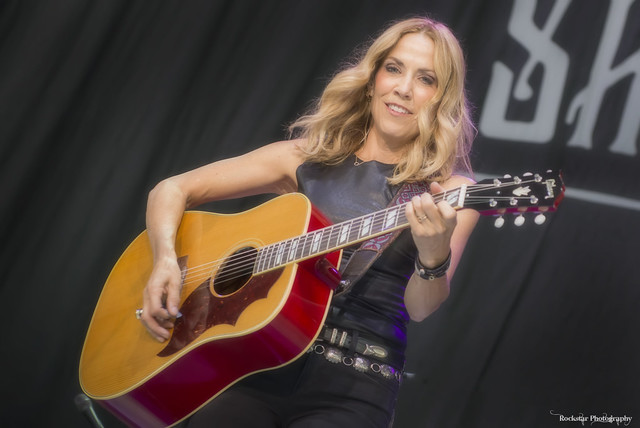 Arguably their greatest hit of all time, here is the music video for Heart’s “Barracuda”: